This article is about the list of Servers, which are officially referred to as "Worlds". For the in-universe lore meaning of "world", see World.

Servers or Worlds are individual instances of Final Fantasy XIV. Servers are located in 4 places on Earth: North America, Europe, Japan, and Oceania. Each region is further divided into Data Centers. Each Data Center has multiple servers.

There are no regional limitations on servers. Anyone can create characters on any of the 4 regions. During Character Creation, players can select the world server of their choice to begin the game on. An indicator by each world in the world list indicates population density, represented by chocobo icons, as low, average, or high. See experience for an explanation of how to create a character on a Preferred server.

To transfer a character from one server to another, player needs to use the World Transfer Service, which costs real world money. This fee is waived only if transferring from a Congested server to a Preferred one, or from any server to a New server. You can check a World's current status on the official world status page. However, players can temporarily visit other servers with the World Visit System and Data Center Travel, which have some restrictions. 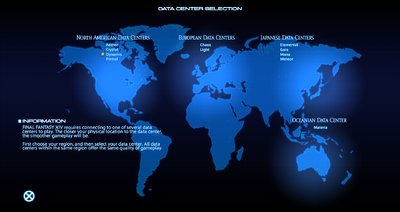 The Dynamis Data Center was added on November 1, 2022 and initially has four Worlds. Four more worlds are planned to be implemented at a later date.

Players may visit other World servers in your data center to party with friends, purchase items, and tackle duties as of Patch 4.57.

Players may travel between logical data centers to embark on adventures with players from those data centers as of patch 6.18.