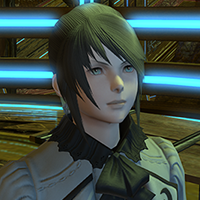 "I am certain that with the Sharlayans' knowledge of arcane sentries, I can complete my project."

The son of a Near Eastern Hyuran merchant in Radz-at-Han, Ardashir traveled with his father so as to learn the family business. His life would change, however, upon his first journey to Limsa Lominsa. There, he spied arcanists at Mealvaan's Gate, and was entranced by their Carbuncles. Upon returning home, Ardashir began to study arcanima, only to discover he had no talent for sorcery, and could not perform even the most basic summoning. He did not give up, however, and instead set out to create an arcane entity that did not rely on the wielder's magic. Ignoring his father's protests, the Hannish Hyuran became the apprentice of a famous alchemist, and has been conducting research on anima since. The lad of seventeen summers is in the habit of jotting down his findings in his journal, wherein he also vents his daily frustrations.

Ardashir is a Hyur found in Azys Lla. Ardashir isn't really a vendor in the same way Jalzahn is for the ARR Relic Weapons (and Gerolt will be for the Stormblood's Eurekan Weapons). Rather, each quest is repeatable and the relic is a reward directly from the quest.