Collectables is a feature for crafting and gathering classes first introduced in Heavensward (3.0).

A collectable is essentially a unique rarity, separate from

High Quality, that is indicated with its own icon:

. The higher an item's collectability number, the more experience points, White Scrip, and Purple Scrip will be rewarded. Collectables cannot be stacked or sold either to regular merchants or on the Market Board, nor can they be consumed or used as material for synthesis.

These general-purpose collectable items can be turned in at any Collectable Appraiser, who are available at:

There are also specific collectibles for the Ishgardian Restoration, Custom Deliveries, and Aetherial Reduction.

Inscrutable Tastes. Players start the quest by talking to Morgayne in Foundation (X:10.1 Y:10.4). It requires the prior completion of the Heavensward MSQ

Additionally, further levels of the Scrip Exchange are unlocked in each expansion, along with that expansion's Custom Deliveries clients thereafter. Once an expansion's inventory is unlocked, it becomes available at all Scrip Exchange NPCs: 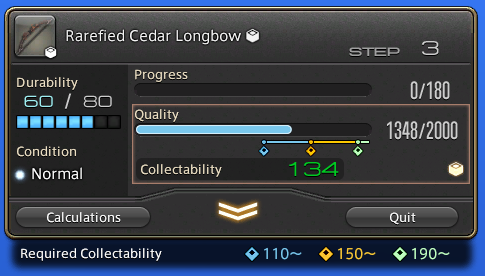 Collectables can be found in a dedicated tab in the Crafting Log under Special Recipes (the bag with a star icon under Recipe Level). The drop-down menu for crafting Collectables is near the bottom, separated into four categories: levels 50-60, levels 61-70, levels 71-80, and levels 81-90. The collectability of an item is determined by the Control attribute and Touch actions, exactly to how high quality items are crafted. With patch 6.1, the collectability thresholds are now visible on the crafting screen (see right).
After the changes in patch 5.3, all general-purpose collectables are prefixed Rarefied, and are crafted with the same ingredients as the non-Rarefied version.

For a full list of general-purpose crafted collectables with thresholds and scrips, see: Collectables/Crafted. 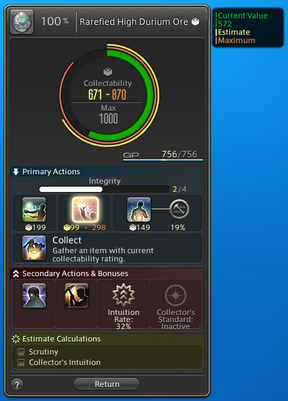 Collectables can be gathered at various nodes starting at level 50, and turned in at the Collectable Appraiser in various cities for

experience. Unspoiled items earn much more; it is recommended to focus on unspoiled items as their nodes have a minimum of six gathering attempts, allowing you to gather more items after reaching the desired collectability. They are usually the optimal way to earn experience points for little effort.

To gather a collectable, interact with the node, reach the item, and click on the desired collectable. You can identify which items in the node are collectables by seeing the

icon next to the item name. When selecting a collectable, a new window will appear with actions specific to collectables (see right). You can increase the item's collectability using actions, then "Collect" the item once the desired collectability is reached. The Collect action succeeds at your gathering rate (as shown by the percentage at the very top). The appraisal actions are based on perception.

Gathered collectibles usually have a separate non-Rarefied version (as of Patch 5.4). These cannot be converted between the types, and the Rarefied items cannot be used as ingredients in recipes in place of the non-Rarefied ones. The different versions will never be found together on the same node. Previously, you could gather the items that only had use as a collectable in a non-collectable form, which is why this change was made.

Fisher still works the old way, which is different. To catch collectable fish, you simply enable

Collect (previously known as the Collector's Glove) and fish as normal. Any fish capable of being a collectable that you catch with Collect active will have a random amount of collectability influenced by your total amount of perception. The abilities

Patience II appear to boost collectability as well.
Note: It is possible to catch collectable fish in a non-collectable form if you forget to enable

Collect. Non-collectable versions of those fish have no use whatsoever.

For a full list of general-purpose gathered collectables with thresholds and scrips, see: Collectables/Gathered.