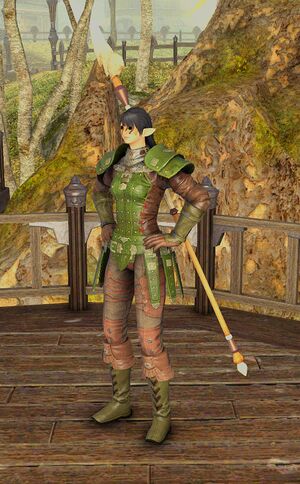 We will protect the wood with our lives!

The Wood Wailers are a group of spearmen formed around the founding of Gridania. Charged with protecting the Twelveswood, the Wood Wailers keep the cities and settlements free from monsters, as well as stop poachers that would put the wood in danger.

In the Sixth Astral Era, after the Ixal were exiled from the forest, the Gelmorrans, Elezen and Hyur settlers who had come some decades before and battled for the safety of the caves amid the attacks of the Elementals and had eventually come together to survive underground, emerged and learned to commune with the elementals. The elementals granted them their blessing and they formed the city of Gridania, under the promise that the Gelmorrans would defend the woods and act as their protectors.

After a time, the Ixal returned from Xelphatol to invade the forests and reclaim the land they had lost. The soldiers that met them were spearmen that were led by Captain Josselin. They battled long and hard but managed to drive the Ixal out of the forest. From this point forward they were known as the Wood Wailers.

Like all the original Gelmorran's, the Wood Wailers are charged with defending the Twelveswood from both internal and external threats. The Wood Wailers patrol the various settlements of the forest, as well as other areas and hunting grounds. They defend the towns and cities from invasions of monsters, and take out monsters that threaten to throw off the balance or destroy the woods. They are also charged with stopping poachers from destroying various ecosystems for their own profit.

The Wood Wailers are masters of the spear and have ties to the Lancer's Guild in New Gridania. They wear green leather and scale armor that is easily identifiable, but provides camouflage within the forest. They also wear masks to conceal their identities, both from brigands and the elementals themselves. These masks are said to signify the Wood Wailers are willing to do whatever it takes to protect the forest, even if that means incurring the wrath of the elementals themselves. However, it is believed that the elementals see people based on the shape of their soul, not their face.

Wood Wailers function as a form of military, with ranks denoting whether they are involved in recruitment and training, what their duty is, where they are dispatched, etc.