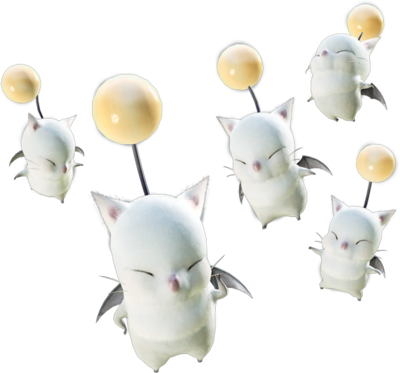 These elusive denizens of the Black Shroud are skilled in the manipulation of aether, their arcane arts allowing them to remain undetected by all but the most determined or gifted of seekers. In the course of recent events, Eorzeans have also become aware of a second Moogle clan in the Churning Mists of Dravania.

Moogles are entirely covered in soft, white fur, and their stubby limbs are almost comically short. From their backs sprout bat-like wings, but these are not flapped to catch the air-rather, each beat releases a burst of aether that provides a means of controlled levitation. A spherical "pom" adorns the head of every moogle, and this distinctive feature has been observed to change color depending on the flighty creature's current moods.

Moogles are omnivorous, and display an appetite for a wide variety of food. The Black Shroud moogles were first introduced to the culinary arts by the people of Gridania, and have since learned to prepare an astounding array of dishes. They do, however, remain particularly fond of the simple Kupo Nut-a crunchy delicacy that also serves the moogles as a form of currency.

The Black Shroud and Churning Mists moogles are ostensibly ruled by their clan chieftains, but both societies are rife with whimsical individualism. There appear to be no overarching laws or organizations that could be said to resemble and form of government.

Despite the centuries of contact Gridanians have had with the Black Shroud moogles, extremely little is known about the enigmatic race's way of life. Moogles have an unrivaled talent for vanishing at a moment's notice, and thus outsiders have been largely unsuccessful in observing the clan's day-to-day existence. Moogle reproduction in particular is a subject of enduring mystery, with any direct inquiries into the matter being casually deflected or simply ignored.

When seeking to achieve specific goals, moogles will often band together to form small, purpose-driven groups. Examples of this can be found in the Mogglesguard and their efforts to summon Good King Moggle Mog XII; the Pomguard, the valiant defenders of the Churning Mists; and the Mogmenders, who work to restore the palace of Zenith. Although scholars are fascinated that such distinctly separated moogle clans would display similar societal behaviors, they are at a loss when it comes to explaining whence this tendency originated.

Though similar in many respects, the moogles of the Black Shroud and the Churning Mists diverge significantly in the matter of individual names.

Amongst the Black Shroud moogles, male names generally begin with a "K", and female names begin with a "P". It is theorized that these letters serve to echo the consonants in the word "Kupo Nut"-a precious treasure their ancestors are said to have carried with them when they descended from the heavens.

On the contrary, the names of the Churning Mist moogles make no obvious distinction between male and female. The names of both genders feature the "Mog" prefix, a tradition purported to have begun long ago with their first ruler, Chieftain Moggle.

The advent of the Seventh Umbral Calamity disrupted the flow of aether, and the unstable energies rendered linkpearl communication highly unreliable for a time. During this period, a number of moogles answered the Elder Seedseer's call for messengers, and began delivering letters across the realm by hand. Unaccustomed to leaving the forest, the moogle messengers were initially terrified by the vastness of the world beyond the Black Shroud. This fear of the unknown, however, was gradually replaced by fascination, and many of them chose to feed their new obsession for travel by becoming full-time delivery moogles. Years later, the sight of the tiny, cap-wearing creatures lugging about oversized satchels of correspondence is a common one to most Eorzeans.

Moogle is also a server in the European Chaos Data Center.