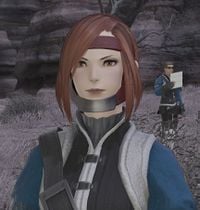 "Alright, let's see if I can't salvage this mess of a masterpiece."

A Hyur born in the imperial capital Garlemald, Jessie always disliked her parents' patriotism; and eventually rebelled. She joined a group dedicated to resisting the Empire, where she met Biggs and Wedge and aided in their defection. After making contact with Cid and establishing an arrangement whereby those fleeing Garlemald could find a safe haven in Eorzea, she herself left her homeland for the succor of the south. She has worked for Garlond Ironworks since, and acted as its leader during Cid's absences.Jessie pays great attention to the company's bottom line so as to ensure that the Ironworks survives as a sanctuary for others fleeing the Empire's tyrannical grip. The tricenarian contributes to the Ironworks' operations by acting as a peddler of their many and myriad wares, including those small-scale models which Biggs crafts in his free time.

Jessie is a Hyur found in Rhalgr's Reach.