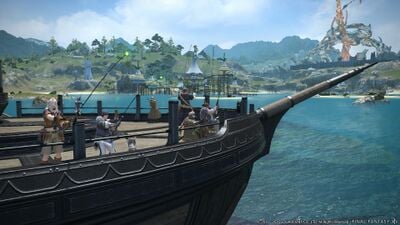 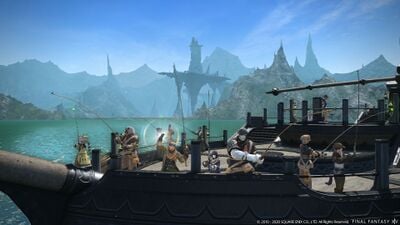 Ocean Fishing is exclusive to fishers which allow them to set sail together on the Endeavor in search of adventure on the high seas. It requires a party of 1 to 24 players and has the time limit of 60 minutes. It was introduced in patch 5.2 of Shadowbringers expansion.

Every two hours (Earth time), players have a fifteen-minute window to register by speaking with Dryskthota on the Limsa Lominsa Lower Decks (X:3.0 Y:12.7). If you wish to enter as a party, the party leader must be the one to speak with the NPC.

When ocean fishing is available, the NPC will be marked with an "!" icon on the map. 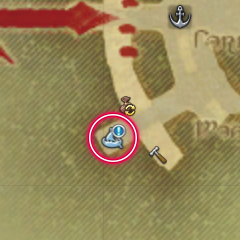 Depending on the time slot, the route taken and time of arrival at the destination may vary. For more information, speak with Dryskthota on the Limsa Lominsa lower decks (X:3.0 Y:12.7) and select "View Sailing Schedule." You can also set an alarm for the time of departure via subcommands.

Fishing on the Endeavor

The Endeavor sails to fishing locations such as Costa del Sol and Horizon, allowing you to see the sights of Eorzea as never before. Players will have seven minutes to reel in fish at each location, with various rewards on offer.

While Versatile Lures can be used, there are other types of lure created especially for the Endeavor. To purchase these lures, speak with the Merchant & Mender on the Limsa Lominsa Lower Decks (X:3.2 Y:12.8) or onboard the Endeavor (X:6.1 Y:6.1).

Other types of lure may also be used.

Rewards are given according to the points earned during ocean fishing.

Information on points earned, the three most recently caught fish, and time remaining can be viewed during the fishing trip. 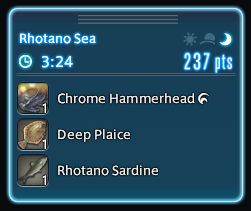 You may also view a list of fish that you have caught in Score Overview. 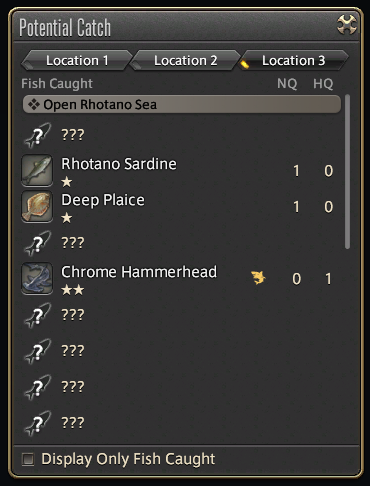 Bonuses are awarded upon fulfilling certain conditions, either individually or as a group, which affect the rewards given upon completion.

Spectral currents will appear under certain conditions and allow a greater number of fish to be caught for a limited time.

Ocean fishing awards experience points based on your level regardless of which fish are caught, making it ideal for leveling up.

Once three fishing locations have been visited, the voyage will end and final results will be announced. 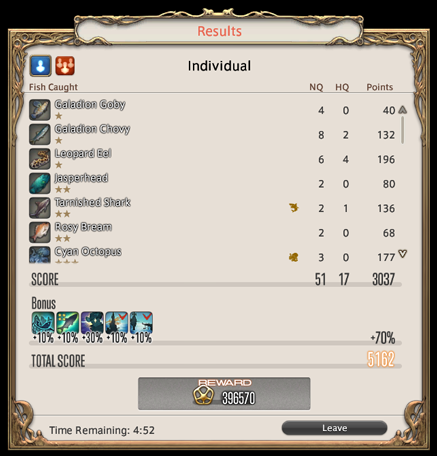 Rewards are given according to the total number of points earned. Each individual player's rewards differ according to current level.