Man should fight for the joy of it. To live, to eat, to breed—lesser beasts snap and howl at one another for this. Only man has the wisdom and the clarity to embrace violence for its own sake.

Zenos yae Galvus is a boss found in Ala Mhigo (Duty). 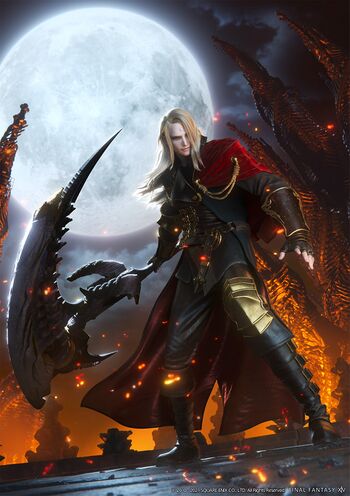 Leader of the XIIth Legion and crown prince of the Garlean Empire, Zenos yae Galvus is possessed of but a single passion: to stand on the front lines, blade in hand, and dance with death. He regards friend and foe alike with contempt, and tales of his brutality against both have spread far and wide. While crushing the rebellion of yesteryear in Doma, he took a liking to Far Eastern katana, which have since become his weapons of choice. Ame-no-Habakiri: Wielded alongside the Storm and the Swell, Ame-no-Habakiri was presented to Zenos by Yotsuyu when he came to Doma. Formerly a treasured possession of the Kojin of the Red, the blade shows impressive craftsmanship and, in his hands, is a weapon of enormous power.