The Hidden Canals of Uznair 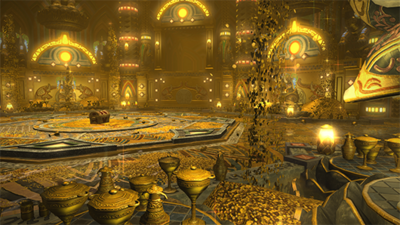 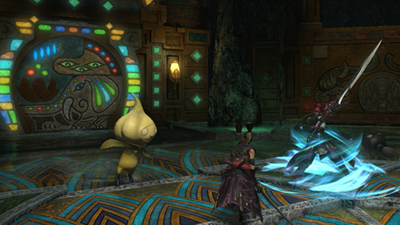 See also: The Lost Canals of Uznair and Treasure Hunt

Timeworn Thief's Map which will reveal a new location on your map.

Players can then use the general action

Dig at the location shown to find a teleportation ward that leads to The Hidden Canals of Uznair.

Treasure chests located within are armed with traps, which, when triggered, will release enemies from their cages. Upon defeating them, the player who caused the teleportation ward to appear will be able to open the treasure chest and retrieve the reward and a Vault Key within.

The Vault Key can be used to open one of the three available doors. Should your party be lucky enough to choose the correct one, you will be allowed to progress through six subsequent chambers, and eventually fight your way to the final chamber.

There are three enemy types that may appear during the trial.

While exploring the Hidden Canals, the loot chest may trigger a mini-game.

When the chest is opened, everyone will see a loot list appear on the screen and two cards floating above the chest. The first card will reveal itself, and the map owner must decide whether the next card will show a higher or lower value than the first. If the player guesses incorrectly, the reward will be lost and the next chamber door must be chosen. If the player chooses correctly, the loot reward for the chest will be doubled. If the map owner wins this mini-game the first time, he will be asked to keep the current rewards or play again; double-or-nothing. The mini-game will continue until they take the winnings, or lose it all.