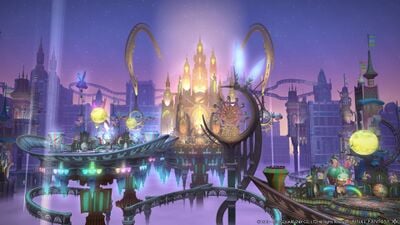 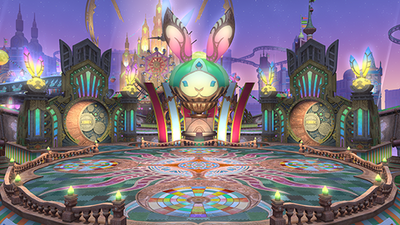 The Excitatron 6000, released in patch 6.05 of Endwalker, is a special instance for Treasure Hunt similar to the Aquapolis, the Lost Canals of Uznair, and The Dungeons of Lyhe Ghiah. It can be accessed after finding and opening treasure coffers obtained from

Timeworn Kumbhiraskin Map. Here, players will have the chance to test their luck and obtain priceless treasures.

Players progress by opening a treasure coffer in each room, which triggers a trap spawning enemy monsters. Sometimes the room has a chance to spawn extra monsters which may or may not drop extra chests. After completing the trap event and opening the treasure coffer, players are given a key to open one of two locked doors. The door will then either open and reveal the next room, allowing the players to progress to the next floor, or kick them out. Occasionally, there will be arrows pointing towards the correct door.

There are 5 rooms in total.

This key section of the article is incomplete. You can help the Final Fantasy XIV Wiki by expanding it.

There are three enemy types that may appear during each round of combat.

Depending on the boss encountered in the final room, some of these encounters are guaranteed to trigger.

Effects of Each Outcome

Opening a door can trigger one of four events:

Clearing all 5 rooms provides you with a gil reward and chance at a rare minion determined by the current patch.

Opening the chamber chest in the center of the room after clearing all mobs will reward the following for each player in the dungeon. Sometimes triggering Gambler's Lure:

When opening a chamber chest, there is a random chance you will get the Gambler's Lure minigame. Here the map owner plays a game of higher or lower, adding the original amount the chest loot to the final amount every time. Numbers range from 1 to 9. If your card is the same as the hidden one; the loot remains the same, you get a new random card, and you play again. This can be done up to 4 times for 5 times the amount of loot, but if the player guesses wrong, all of the loot is lost.

After countless years of research, it was determined that 89.7% of mankind craves worldly delights and the thrill of battle, and is prone to an irrational penchant for leaving its fate to chance. Naturally, it will be no mean feat to please such fickle beings, but the Loporrits are ever eager to astonish and amaze. You may rest assured that this attraction is to die for!