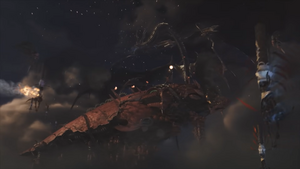 The Agrius during her final battle with Midgardsormr

The Agrius was a flying fortress built by the Garlean Empire. The vessel was in a size class all its own, the Agrius-class. The vessel was designed to support and house an entire Legion and anything they would need. The Agrius was gifted to the newly minted XIVth Imperial Legion for her maiden voyage, and was used as the lead vessel in the invasion of Eorzea. Upon crossing over Silvertear Lake, however, it was suddenly beset by Midgardsormr and a horde of Dragons. It fell during the Battle of Silvertear Skies, careening into the lake entwined with the Wyrmking, and exploded. The wreckage is still visible from Mor Dhona, and

The Keeper of the Lake takes place inside.