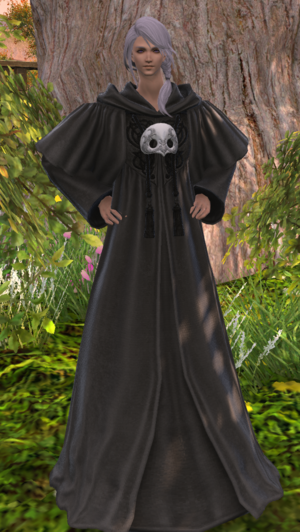 Hythlodaeus, Chief of the Bureau of the Architect 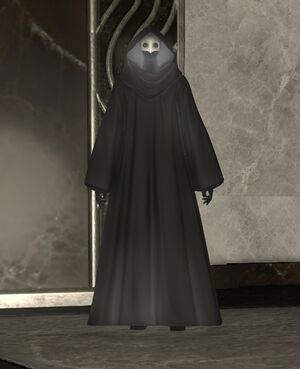 The Amaurotine or ancients are the original, unsundered inhabitants of Etheirys, with its capital at Amaurot.[1]

Amaurotines are approximately three times the height of a Hyur, much taller than all the Eorzean races, implicitly because of the difference in aetheric density compared to the modern-day races of mankind. In-game models appear to mostly use facial features belonging to Hyur and Elezen, but the reason for this is unknown. The eye colors (in the rare times an Amaurotine is seen without a mask) are also notably more vibrant, likely as a visual shorthand to express their aetheric density.

Available information also tells us that like modern mankind, the lives of the Amaurotine are not infinite, though the exact bounds and conditions of maintenance are still somewhat unclear. Children are "born" but it's not known if Amaurotines experience pregnancy, if two parents of opposing sex are required for it to happen, or if there are limitations on who can birth a child as there are for modern mankind. Children age into adults, and adults show visual signs of aging.[2] Death, or "returning to the star" as the Amaurotine prefer to describe it, is implied to be a predominantly voluntary action that is chosen by Amaurotine who have lived their lives to the fullest.[3] Outside of this choice, premature death does seem to be possible if caused by injury[4], and possibly if the Amaurotine fails to fulfill its basic needs.[5]

Amaurotines all traditionally wore identical robes and half-masks, as expressions of personal identity were considered rude and unseemly. The color of the robe an Amaurotine wears also had significance related to their societal role. Specifically,[8] white robes are meant to indicate that the individual wearing them is capable of serving as a "neutral advisor" who can assist other Amaurotine with conflict resolution. [9] It is yet unclear how an Amaurotine earns these robes, outside of being a member of the Convocation of Fourteen.

This key section of the article is incomplete. You can help the Final Fantasy XIV Wiki by expanding it.

Though little consistency is found, most Amaurotine are named in ancient Greek or Latin after figures from real-world mythology and legend, such as heroes, philosophers, or gods/demi-gods.

This key section of the article is incomplete. You can help the Final Fantasy XIV Wiki by expanding it.
Reason: "Copy-pasted text moved from the Ascian page, needs cleanup and update."

Before recorded history, the Ancients were the only beings that inhabited the star. The Ancients were able to wield Creation magic, which they used to build a glorious utopia. The citizens were able to dedicate themselves to their principals of rhetoric, creation and public service. These beings were ruled over by the Convocation of the Fourteen, who were the wisest and able to use Creation magic to the fullest.

But one day, something creating a sound that disrupted the use of their Creation magic echoed from within the star, causing the birth of malformed creatures formed from the Ancients' deepest fears. Because their magic was corrupted, they were unable to bring the creatures under control. This caused the people to further despair, creating more monsters and causing more chaos. This time of destruction came to be known as the "Final Days".

Realizing they had little chance to bring the chaos under control, the Convocation sought to rewrite the laws of reality of the star. To achieve this, the Convocation sought to summon Zodiark, a being of immeasurable power. However, the cost to call this being forward was great, requiring the life force of half the Ancients still alive to amass the amount of Aether required. Opposing this, the Ancient named Azem left her position on the council, not wishing to take part in the senseless loss of life.

And so, the Convocation sacrificed half of the Ancients to summon Zodiark, with Elidibus acting as the ancient Primal's heart. Zodiark was able to prevent the total destruction of the star, however the Final Days had rendered the planet a destroyed, lifeless place.

The Convocation sought to use Zodiark's power once again to restore their home to its former glory, however there were Ancients who opposed this idea, not viewing using the primal's power as worth the cost. This group of Ancients were led by Venat, arguing that the loss of life to bring back those who were previously sacrificed to summon the primal the first time was foolish.

From this conflict, the Ancients under Venat sacrificed themselves to summon Hydaelyn, with Venat acting as its heart. They used this primal to seal Zodiark and lock his powers.

The two primals were locked in an eternal conflict, destroying what little life was left on the star. This continued until Hydaelyn struck Zodiark down with all her might, shattering the very fabric of reality, splitting off thirteen reflections later called Shards. This also split the souls of the remaining Ancients across the shards as well. This came to be known as the Sundering.

Elidibus, Emet-Selch and Lahabrea managed to survive the Sundering. But seeing the damage caused by the battle between Hydaelyn and Zodiark, they came together and vowed to restore the world and the Ancients to what they were before the Final Days. They set about finding the souls of the other members of the Convocation to bring them together once again, and planned to use the newly created life forms to summon Zodiark to Rejoin the shards back to the Source and unsunder the souls of their people.

After gathering the members of the Convocation together, the group reunited under the name of Ascians, and set off to each of the Shards to bring about large enough Calamities to force the Shards to rejoin the Source.

Each Shard was to be overseen by an Ascian. However, this changed after Igeyorhm accidentally led the heroes of the Thirteenth to being exposed to the corrupted Aether of Primals trapped within Auracite. This caused the people of the Thirteenth to go mad and attack one another, bringing about the Calamity of Darkness, turning the Thirteenth Shard into the Void. From here, the Ascians worked in groups to bring Calamities to each Shard. Notable examples of the Ascians influencing events in history are Emet-Selch starting the Garlean Empire or Elidibus becoming the first Warrior of Light in history.

Throughout the Source's history, The Ascians have worked to sow chaos and destruction. By creating a Calamity on a Shard and a corresponding Calamity on the Source, the Shard will rejoin to the Source. So they set about sharing their Creation magic with the people to teach them to summon Primals. THe first time this can be seen on the Source is when the Meracydians summoned Bahamut against the Allagan Empire.