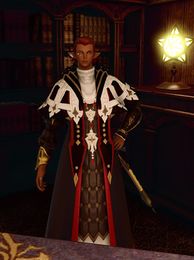 "Greetings and welcome to the Athenaeum Astrologicum. Might I ask what drew you here to this place of learning?"

The sole proponent of astromancy in Ishgard, Jannequinard began his studies in the art when, during his formative years, he spent several moons at the Sharlayan settlement in the Dravanian hinterlands. Barely had he begun to grasp the fundamentals, however, when the Sharlayans withdrew to the Old World in fear of the Garlean Empire's hostile advance. Jannequinard found himself suddenly bereft of both tutor and classroom, and had little choice but to make his way home.
Upon his return to Ishgard, the disappointed and dissatisfied noble leveraged the influence of House Durendaire to secure a position at the Athenaeum Astrologicum. Fixated upon the dragon star and predicting the movements of the Horde, however, his colleagues had little time for the intricacies of astromancy, and Jannequinard's efforts to pursue the discipline met with disinterest, if not outright mockery.

Jannequinard is an Elezen found in The Pillars.