The motherly proprietress of the Carline Canopy, Gridania's ever popular teashop. Even as her fellow citizens look upon outsiders with distrust, Miounne welcomes newly arrived adventurers with open arms, and helps them to find their way in the forest nation.

Mother Miounne is an Elezen found in New Gridania. She is the proprietress of the Carline Canopy (Gridania's Adventurers' Guild), and is one of the first NPCs to welcome new adventurers starting in Gridania. 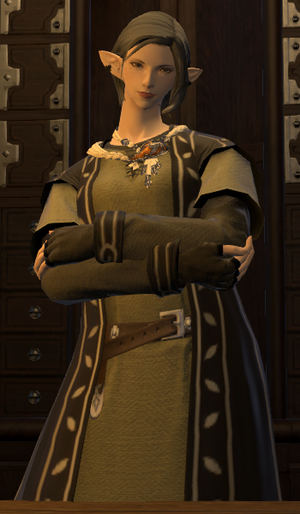 Miounne runs the Carline Canopy in Gridania. From the establishment's open terrace, one can see the mighty waterwheel built by the Wildwood woman's best friend, Figaga Figa, and always smell the comforting scent of tea-Miounne's passion. Indeed, she can prepare a most reinvigorating brew, thanks to her talents as an herbalist and mixer of medicines. At the age of thirty six, Miounne is a well-known figure, having done much to aid the city-state. This is in no small part due to her role in the Adventurers' Guild. As the Gridanian liaison, she has earned the trust of not only adventurers, but also of the townsfolk who can come to her when they require a reliable hand.

Players can learn the origin of the Carline Canopy's name through the Delivery Moogle Quest: Carline Memories.

Mother Miounne: Welcome to the Carline Canopy, a place of respite for adventurers like yourself.

Mother Miounne: As you may imagine, the Twelveswood has scarcely begun to recover from the devastation wrought by the Calamity, and Gridania wants for all the help it can get. I hope we can count on yours.

Mother Miounne: Though I will not deny there are those among us who view outsiders with suspicion, if you play your part, they will come to see that adventurers are the very salve our nation so sorely needs.