Oh cruel, cursed fate, to deliver unto us Hildibrand Helidor Maximilian Manderville, brave inspector and Gentleman of Light reborn, only to snatch him away in a manner eerily similar to his original departure. To the heavens above the far-flung northern reaches did he soar, and for a time was it feared he might never be seen again. Yet Nashu Mhakaracca, as a fervent believer in the inspector (and gravity besides), still has faith that he will return. Her search now leads her to the Holy See of Ishgard, where she hopes to find the missing man─and, perhaps, a case...? 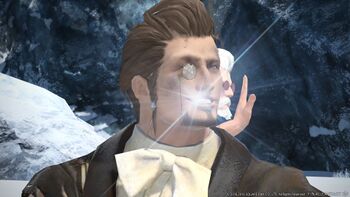 Patch 3.2: The Gears of Change

Patch 3.3: Revenge of the Horde