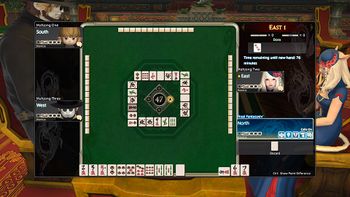 Doman Mahjong is a Gold Saucer mini-game released in patch 4.5. Mahjong is a game in which four players gather tiles and race to complete a winning hand. You may play against other players or NPCs.

Doman mahjong is closely based on the Japanese style of mahjong. 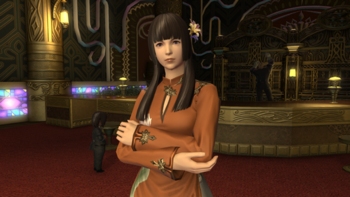 The Gold Saucer's mahjong tutor (X:7.2, Y:7.7) teaches the basic rules, making a conversation with her the ideal place to start. 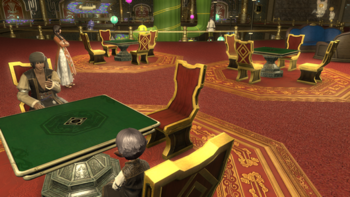 Access any of the three mahjong tables in the Gold Saucer (X:7.2, Y:7.7) to challenge NPCs of varying difficulty. 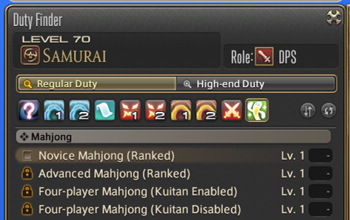 Use the Duty Finder to be matched against other players.

This match type is immediately available. After registering as a solo player, you will be matched against other players. Bear in mind that your performance will affect your rating.

Only players ranked 1st dan or higher can register. After registering as a solo player, you will be matched against other players.

All increases and decreases to personal ratings are greater than in novice matches.

A party of four players is required to begin the match. Ratings and ranks are not affected. The kuitan rule allows tanyao yaku to be used after calling pon or chi. (See in-game instructions and Lodestone for details on the various rules.)

A party of four players is required to begin the match. Ratings and ranks are not affected. Playing with kuitan disabled prevents tanyao yaku from being used after calling pon or chi.

Your rating starts at 1,500 and will increase or decrease according to your finishing position in each match. An achievement is available for reaching the highest possible rating.

Passing specific point thresholds will increase your rank. Although you cannot be demoted while in the lower ranks, progressing to the higher ranks puts you at risk of demotion should you perform poorly.

Each player has a certain amount of time to take their turn. A tile will be discarded automatically if that player fails to act within the time limit. This time limit does not apply to four-player Mahjong (kuitan enabled/disabled).

If a single hand lasts more than 80 minutes, the following hand will be the last one played. Once that hand ends, the game ends, final placements are decided, and the results are recorded.

If a player logs out during a mahjong match, tiles will be discarded automatically when their turn comes around. When the player logs back in, they will regain control from the next hand onwards.

If players abandon a match, it will continue without them, and their tiles will be discarded automatically. They will also incur the standard penalties for abandoning a duty and will be unable to register for another mahjong match until the previous match ends. In addition, they will be counted as having finished in fourth place. If players do not enter any commands for a certain amount of time, they will be automatically removed from the match. 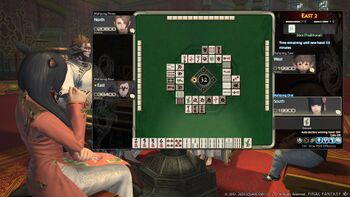 Quick Match was released in Patch 5.4 of Shadowbringers. In a full match, a round consists of eight hands, during which time the role of dealer passes around the board twice. The player with the highest score at the end of the round is declared the winner. In a quick match, however, only four hands are played.

Following the addition of this new match type, the title of Mahjong entries in the Duty Finder have been adjusted as follows: 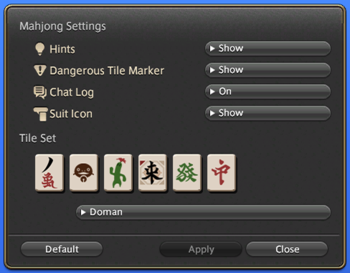 From the main menu, select Character, Gold Saucer, then Mahjong to check your rating and rank.

You may also change the following settings.

Enable this feature for recommendations on which tiles to discard, whether to call pon or chi and so on. Following these hints will not guarantee victory, though you may find them useful as a reference.

When discarding a tile, there is always a risk that an opponent may claim that tile to strengthen their position or even win the hand. These markers indicate which tiles carry a high risk of being claimed by an opponent.

Forming a party of four and starting a match allows you to use party chat. Toggling this option allows you to leave or rejoin the chat.

If you leave the chat, you will not be able to send or view messages. An icon indicates whether other players are participating in the chat.

Highlight a tile to display its name.

The ancient Doman game of mahjong joins the entertainment on offer at the Gold Saucer. Face off against your fellow adventurers or practice against automata, and hone your strategies to triumph in this contest of wits!