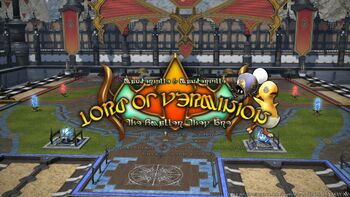 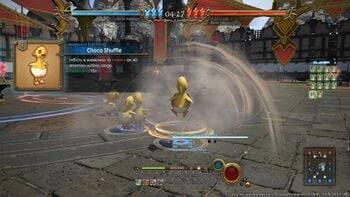 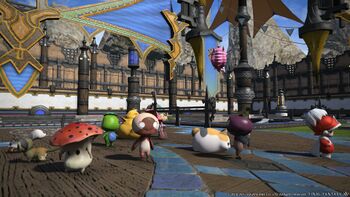 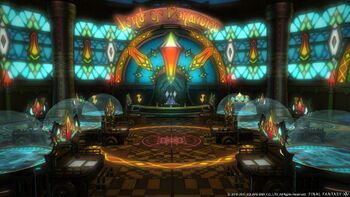 Lord of Verminion is a minion battle strategy game in Gold Saucer introduced in patch 3.1. It is a competitive mini-game in which a player engages an opponent using summoned minions. The objective for winning the game is to have your minions destroy "arcana stones" placed on the battlefield. Players can participate in matches against other players or the CPU.

Stats and ability types vary from minion to minion, making it possible to bring together different special actions for diverse battle strategies. The game is also conducted in real-time, which means the player will need to plan their minions' positions during combat, making Lord of Verminion an RTS game.

Lord of Verminion will be available upon unlocking the Gold Saucer.

Players can access Lord of Verminion in a new area called Minion Square, located inside Chocobo Square. Players can enter Chocobo Square by speaking with the lift operator Saethrith at the Entrance Square (X:4.4 Y:6.7).

Three minions or more are required to play Lord of Verminion. Before the match begins, players will select which minions to summon using the special minion hotbar. To edit the minion hotbar, select the Verminion tab in the Gold Saucer window under Character in the main menu.

Each minion has its own stats and special actions. Players can view a selected minion's stats when editing the minion hotbar.

Minions are separated into four types—monster, critter, poppet, and gadget. Three types will fight at either an advantage or a disadvantage depending on the nature of their opponent. The strength and weakness affinities for monster, critter, and poppet are as follows:

Each minion has a summoning "cost." Cost affects which minions the player can summon to the battlefield, and the player cannot summon minions, which exceed the set total cost. Cost also affects how much time it will take to summon the next minion. For instance, when a player summons a minion with a high-cost value, it will take a longer amount of time to summon the next minion to the battlefield.

Certain minions' special actions lay traps. Ten seconds after being set, traps can be triggered with the "Trigger Trap" button.

Lord of Verminion uses a system based on Rank Points (RP) to determine your strength as a player. These points will increase or decrease in accordance with how well you do in battle. For every battle you participate in, you will be paired against players with a similar number of RP to you. Total accumulated RP can be viewed on the Verminion tab of the Gold Saucer window under Character in the main menu.

Lord of Verminion battles can be accessed from Chocobo Square (X:7, Y:6) and there you will be able to register for various battles through the LoVM tables.

Campaign battles against the CPU. The rules and basic controls for LoVM can be learned by playing through the Verminion Challenges. There are 24 challenges. Players will obtain Clockwork Twintania after completing all 24.

Player Battle (Non-RP) - For Non-RP Player battles, you will be able to battle anyone of your choosing. By inviting your desired opponent to a group, you will be given the option of selecting them as your opponent.

Master Battle - This single-player battle mode is divided into three levels of difficulty.

Battles are divided into two stages: briefing and engage. After registration for a battle is complete, the briefing phase begins and will last for 20 seconds.

During these 20 seconds, you will be able to select the first set of minions you want to summon to the playing field. Minions can be chosen via the Minion Hotbar or Battle List and will go into the minion summoning queue once selected.

Your summoning gauge is capped at 60 during this phase, so you will be unable to queue up minions if the total cost exceeds this number. Players can check minion summoning costs by referring to the cost gauge, located on top of the Minion Hotbar.

After the 20-second briefing period is up, the minions that both you and your opponent put in the summoning queue will spawn simultaneously, and the battle will begin. During this phase, you are afforded up to a total cost of 240 for summoning. Even when that limit has been reached, you will still be allowed to put up to three additional minions in the queue.

The green gauge represents the total cost for summoned minions, whereas those still in the summoning queue are represented by the orange gauge.

The following are shortcuts that can only be used during LoVM battles.

By left-clicking with the mouse on any location on the minimap, you can move the camera instantly to that location.

This function is only available on gamepads(*). By holding down the jump point button, moving the jump point and then releasing the button, the camera will instantly move to the desired area.

Four structures exist on the playing field: Arcana Stones, Gates, Shields, and Search Eyes. Each of these structures possesses special properties, and both combatants have access to them.

Both combatants have three of these on the playing field. Each stone has a set amount of HP, and they will shatter if the total reaches zero. Shattering all three of your opponent's Arcana stones is the key to victory. 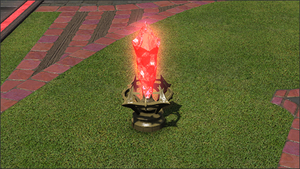 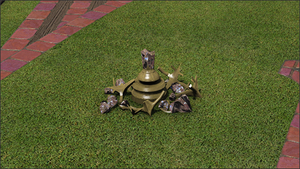 Gates are used to summon minions, and both combatants have three gates. Minions inside the gates will restore HP. Minions cannot be moved outside of destroyed gates, nor can they enter them. 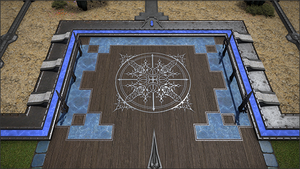 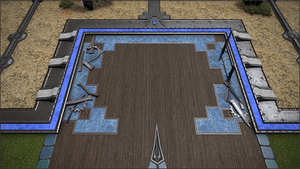 Shields add defensive strength to Arcana Stones. The stones will shatter more easily if the shields are destroyed. 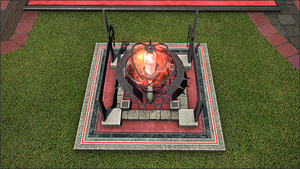 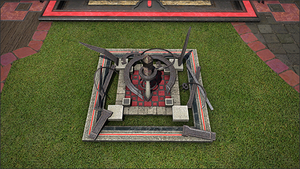 Search eyes reveal your opponent's minions on the playing field and minimap. If the Search Eye is destroyed, then you will only be able to see enemy units that are near your own minions. 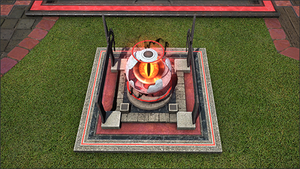 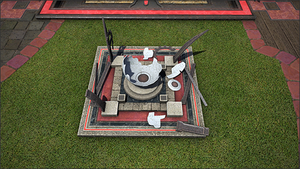 Reducing a structures HP to zero temporarily destroys them. However, their functions will restore once a certain amount of time has passed, which can be hastened by positioning minions near the destroyed structure. A gauge will display the time required until reactivation starts.

Each variety of minion is capable of inflicting greater damage against certain structures. Information about your minions' strengths can be found by going to the edit minion hotbar or battle list. The information can also be viewed from the window that appears when you hover the cursor over the minion hotbar.

Victory is achieved when all of an opponent's Arcana Stones have been destroyed. A match can also be won if an opponent retreats in the middle of battle. Your opponent's rank points will affect the number of rank points you receive but will not affect MGP rewards.

The Manderville Gold Saucer will periodically host Lord of Verminion Tournaments. Compete against minion enthusiasts from across the datacenter for a chance to win large sums of

Players can sign up to participate in ongoing tournaments by speaking with the Tournament Recordkeeper NPC at the Chocobo Square in the Manderville Gold Saucer (X:7, Y:7).

Tournaments consist of multiple matches against other players, with victories earning you tournament points. Players are allowed to play up to 30 matches per tournament.

Players can view the standings for ongoing tournaments at any time by either examining the Tournament Ranking Board at the Minion Square in the Manderville Gold Saucer (X:7, Y:7) or by accessing one of the Lord of Verminion tables and selecting tournament, then Rankings. Scores will be locked the moment the tournament ends, and these numbers will determine the final rankings. Redeemable rewards are acquired by speaking with the Tournament Recordkeeper.

In patch 3.4, players can play Lord of Verminion through the Duty Finder. Matching will include all players within the same data center.

Players may choose from the following challenges found under the Gold Saucer tab of the Duty Finder. Please note these matches can only be accessed through the Duty Finder.

Lord of Verminion is associated with the following achievements:

The game is named after Lord of Verminion, a series of collectible cards published by Square Enix, which features many Final Fantasy monsters.