The Slice Is Right 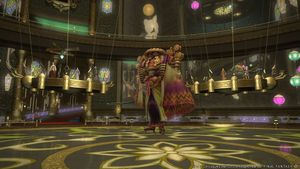 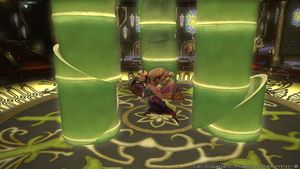 The Slice Is Right is a GATE in Gold Saucer. Avoid Yojimbo's attacks and reap rich rewards.

Speak with the Strangely Garbed Gentleman at the Gold Saucer (X:7.6 Y:4.7)

Yojimbo will summon two or three bamboo stalks and quickly slice through them. The cut he makes will determine how they fall:

There are two interludes. In the first, Yojimbo spawns four gold piles which will be gobbled up by Diagoro in sequence. Clicking a pile will reward more MGP, but standing on the pile when Diagoro jumps to it will cause you to fail the GATE. The second interlude sees Yojimbo spawn three cups, spin them, then divide the platform into thirds. You must decide which section to stand in to get the reward from the cup. One reward is gold, one reward is nothing, and the last reward is being knocked off the platform and failing the GATE.

Steer clear of Yojimbo's attacks until the very end and you will receive 5,000 MGP. Additional MGP can be earned during the GATE when certain conditions are met.

You will fail the GATE when either struck by Yojimbo or after falling off the stage, at which time you will receive a reward commensurate to your progress in the GATE and any additional MGP earned.

Hailing from the Far East, the mysterious swordsman Yojimbo descends upon the Gold Saucer! Only those with lightning-quick reflexes and the providence of the kami will be able to withstand his onslaught and reign victorious in the ultimate test of skill...and sheer luck.


Do Not Sell My Personal Information
Retrieved from "https://ffxiv.consolegameswiki.com/mediawiki/index.php?title=The_Slice_Is_Right&oldid=317662"
Categories: