View of Ala Mhigo

At the culmination of a bloody war, the city-state of Ala Mhigo at last won its freedom from two decades of stifling imperial rule. The nation has entered the ranks of the Eorzean Alliance, and now joins those who aided its liberation in writing this new chapter in history.

Ala Mhigo is a city in Gyr Abania.

This article is about the city state as a whole. For the level 70 Dungeon, see Ala Mhigo (Duty).

“The highlands of Gyr Abania in the eastern reaches of Aldenard were once under the control of a martial nation known as Ala Mhigo. It was, perhaps, the historically conflicted nature of the territory that forged the country into a significant military power.

Even as this aggressive nation sent its forces to conquer in the west, it repelled repeated attempts at invasion from the east. In the Year 1557 of the Sixth Astral Era, however, it finally fell to the incursions of the Garlean Empire. From that time onwards, the country became merely another imperial territory under the governance of its usurpers. Though the people of Ala Mhigo once revered Rhalgr, the Destroyer, as their patron deity, any such religious observance has since been forbidden by the controlling authorities.

An occupied city-state located in a mountainous region of eastern Aldenard. The nation was plunged into chaos twenty years ago when its masses rose up in rebellion against the tyranny of the mad king Theodoric. However, unbeknownst to many, it was none other than the Garlean Empire that had been pulling the strings from the shadows the entire time. They quickly set about moving in to take control of Ala Mhigo as anarchy reigned, and have remained in control of the nation for the past twenty years.”
—Game Description

The only player-accessible parts of Ala Mhigo are the Ala Mhigan Quarter in The Lochs and the dungeon version of the city. 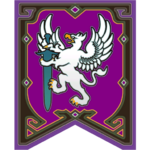 The Ala Mhigan flag is a field of purple upon which stands a silver griffin with sword in talons. The winged creature is the sigil of the nation's royal house, and the blade signifies the force used to see all other clans bend the knee before them. Purple is the color of Rhalgr, the guardian deity of the nation, and is associated with his element of lightning. The hue's presence on the pennant also marks the bond betwixt the royalty and religious order of the Fist of Rhalgr.

Upon casting off the Empire's yoke, Ala Mhigo instituted an interim government built upon the Resistance's command structure. Envoys of myriad races-leaders and elders from across Gyr Abania-Were then called to a summit to decide the nation's fate. After much debate, the assembled representatives chose to emulate the structure of Ishgard's new republic, and entrust the city-state's rule to an elected council.

Ala Mhigo is governed by a council of representatives, its members elected to speak on behalf of Gyr Abania's diverse settlements and tribes.

Under the sovereign rule of King Theodoric, and later the dominion of the Garlean Empire, worshipers of Rhalgr were oppressed and punished for their beliefs. Since Ala Mhigo's liberation, however, the people are free once more to practice their faith, and this resurgence has been accompanied by the appearance of a young monk who seeks to restore the fist of Rhalgr. The Fist's stance on orthodox doctrine has earned it the support of the citizenry, and the order's number of adherents continues to grow daily.

Large numbers of Ala Mhigan refugees found themselves funneled into the mercenary trade, and even now, little has changed for the majority. Although some few have embarked on the long road back to Gyr Abania, many in the hire of organizations such as the Brass Blades or Stone Torches are reluctant to abandon the stable work and steady coin. Until the restoration of their homeland is complete and its economy repaired, Ala Mhigo's wayward sons and daughters will continue to live as sellswords.

In some of the poorer villages, there has been a recent surge of interest in agriculture. Inhabitants have begun planting dates and other crops which can thrive even in the dry and dusty soil.

Under the auspices of Sultana Nanamo Ul Namo, a school for training aspiring goldsmiths was opened in Rhalgr's Reach. The school has enlisted the aid of the Ananta and their sorcerous command over metal, and the initiative is gaining interest as a promising new industry for Ala Mhigo.

The challenging business of refining salt from the waters of Loch Seld has been a key industry in Ala Mhigo since before the Empire's invasion. With contributions from Ul'dah's royal treasury and the mercantile connections of the East Aldenard Trading Company supporting the effort, the expansion of operations in the Saltery and subsequent distribution of its products are progressing at a phenomenal pace.

As a result of fighting alongside the Vira during the war for liberation and benefiting from the continued assistance of the Eorzean Alliance, Ala Mhigo's population is quickly adjusting to the presence of different clans and races. People are put in mind of the disparate groups of refugees who banded together in the mountains of Gyr Abania to survive the flooding of the Sixth Umbral Calamity, and the parallels between the situations have become a source of hope and camaraderie.

A wide range of foodstuffs were shipped in from Ilsabard during the decades when Ala Mhigo was yet a province of the Empire, but such imports were destined only for the dining halls of affluent imperial officers. As such, the diet of the common folk has remained largely unchanged. Ala Mhigan cuisine may have become even less diverse due to the cessation of trade with the east and a subsequent shortage of spices.

As native Ala Mhigans, both Yda and Minfilia are canonically highlanders, but no female highlander model existed in 1.x, which is why they look how they do today.