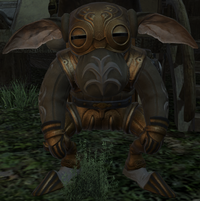 "Idyllshire has one important rule—always respect friends. If we all obey this rule, one day Idyllshire become great city!"

The founder of Idyllshire, Slowfix serves as a figurehead for the goblins of Idyllshire. He was once a wanderer who would pay for his travels through the collecting and refashioning of junk salvaged in the wild. During his roaming, he saw how folk lived within cities, and felt a strong draw towards the decidedly ungoblin-like lifestyle. Thus, once he had completed his pilgrimage, he began to search for a location where he could forge his own nation.Slowfix's mask is made of dull bronze, and has been handed down through generations of his family. Now that he has seen forty-one winters, he is considering passing it on to his daughter, Roundrox, who has been slow to warm to the notion of donning her father's reeking namesake. Slowfix is also a master at goblin gambling games, and can be found throwing dice when no other matters require his attention.

Slowfix is a Goblin found in Idyllshire.