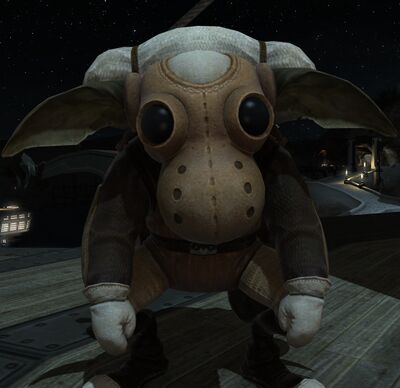 Goblins are a diminutive beast race found throughout Eorzea. They are always seen wearing masks with bulbous noses.

There are two competing factions of Goblins found in the Dravanian Hinterlands: the hostile Illuminati and the peace-minded goblins of Idyllshire. There, the old Sharlayan colony has been repurposed by a group of formerly nomadic Goblins as a home for all who seek to live in harmony. The Goblins are a scattered, nomadic tribe, claiming no land as their own. Said to embark on a great pilgrimage once every hundred years, the entire race appeared to have vanished from the face of Eorzea for quite some time, and it is only in the last five years that the realm has seen a return of their kind.

Though their physical stature is similar to Kobolds, goblins never adopt the former's four-limbed gait, preferring to clatter quickly about on their two stubby legs. In addition to a bulbous snout, they have long, floppy ears which protrude from their ever-present face masks-an affectation that the curious beastmen are never without. It is rumored that if one were to attempt to remove a goblin'smask by force, the act would trigger explosives rigged inside the headwear, resulting in a bloody, unrecognizable mess of both goblin and perpetrator.

Avid fishermen, goblins tend to consume a prodigious amount of seafood, but they will happily sate themselves on whatever fare is available. As is often the case for nomadic peoples, the wandering beastmen have perfected the art of preserving food, being especially proficient in the creation of cheese and dried meats. They also enjoy a unique beverage known as "rot-tea"-the flavor of which has been described by adventerous gourmands as something akin to swamp mud.

The race of goblins is fractured into small, nomadic groups, and there exists no central organization that could be considered representative of a goblin nation. each faction follows its own rules and agendas, and where some groups are commanded by charismatic, hereditary leaders, others might be governed by an elected council.

Goblins have an insatiable curiosity for technology in all its forms, and this enthusiasm drives them to master such diverse fields as Firesand preparation and sutomata manufacture. Known from their long history of frequenting the settlements of man, goblins are seen traveling from city to city, absorbing the local wisdom as they hawk a plethora of wares drawn from their enormous "gobbiebags". Many cholars consider this migratory practice to have contributed significantly to the spread of knowledge between civilizations. Due to the transient nature of their visits, however, goblins often dail to fully grasp a region's law and customs. This ignorance can lead to misunderstandings with the populace-the more serious infringements occasionally resulting in imprisonment or even bloodshed.

Although goblins use the common tongue to communicate with other races, listeners often find themselves groping for meaning amongst the unusual compound words the beastmen substitute for everyday terms. This habit of mashing together nouns and adjectives extends to the goblin's names, resulting in some truly outlandish combinations. As a general rule, their given names will also end with either ix or "ox", these suffixes denoting a "handsome male" or "beauteous female" respectively.

During their nomadic wanderings, goblins will make brief stops at the settlements of other races to resupply, peddle their goods, and purchase stock to sell at their next destination. This mercantile experience stands the beastmen in good stead with mercenary companies, which look to hire goblins for their proficiency as quartermasters.

Goblins possess an affinity for all things mechanical, and their curious creations are frequently purchased by the fascinated and bored alike. In particular, goblin-made clocks are prized by the wealthy for the impressive accuracy with which they keep time.

Goblin is also a server in the American Crystal Data Center.