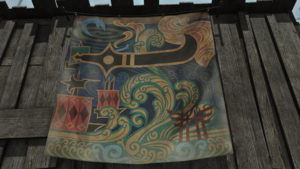 Flag of the Confederacy of the Ruby Sea

I realize you do not look kindly on the Confederacy and her ways. But if you refuse to pay the Ruby Tithe, your safety in these waters cannot be assured.

The Confederacy is made of an independent fleet of pirates that controls the waters of the Ruby Sea who are made to cut ties with their nation and swear an oath of allegiance to the organization. As they are made up of all sorts of peoples, their flag is designed to represent them all, colored and covered in many shapes that tells of their history.

At the time of many wars in the land of Hingashi, many of those who were exiled from the lands came together on the isle of Sasaki. This group of people eventually came to be the first members of the Confederacy. While the wars raged and the rulers of different parts of the country bid their Samurai to fight for them, more and more people from all parts of the land steadily fled to Sasaki and joined the ranks of the Confederacy, till they were such in number as to become a dominant force in the Ruby Sea.

After some time, and their ranks were as large as they had ever been, they sought to build a headquarters on the Ruby Sea, where they guarded the waters. They set up their home, the fortress of Crick at the foot of Heaven on High. Though this was a sacred land that forbade any from entering onto it, none could control the organization.

The Confederacy soon began charging the "Ruby Tithe", a fee they charged any vessel to assure their safe passage across the Ruby Sea. This did not sit well with both Doman and Hingan military factions, but the Confederacy fought fiercely to maintain its freedom and independence. Though many had tried, they could not be convinced to swear fealty to any leader. While this was true even after the occupation of Doma, the Garlean Empire and Yotsuyu tried to take this freedom from them, as the Confederacy stood as one of the few oppositions against them. The Confederacy often battled against them, but they were slowly losing ground against the Empire.

The Scions of the Seventh Dawn and the Warrior of Light are looking to cross the Ruby Sea, and are seeking the Confederacy to pay the Ruby Tithe. Witnessing an Empire ship sail by and the Imperial soldier on board shouting threats to Tansui and sailing by, the Scions approach him and explain their reason for being there. Recognizing their ability to upset the current status quo and cause problems for the Empire, he allows them to pass free of charge.

While passing over the Sea, they witness Yotsuyu and a group of Imperials torturing a small village, forcing them to kill eachother for her pleasure. Gosetsu, seeing this, turned himself in to her in order to stop her madness, and bids the Scions and the Warrior of Light to find a way to rescue him and stop Yotsuyu's madness.

The Scions seek an audience with Rasho, the leader of the Confederacy, in the hopes that they can convince him to help them in their fight to free Doma and rescue of Gosetsu. Initially he declines and turns them away, but when Alisaie Leveilleur bargains, saying they will deprive the Imperials of their Red Kojin allies in exchange for their cooperation, he agrees, and sends them to their task.

Once the Scions and the Warrior of Light defeat the Primal Susano after accidentally summoning him, a wedge is driven between the Kojin and the Imperials. Hearing word of this, the Confederacy immediately act to intercept Yotsuyu's forces and drive them from Isari. The captives-Gosetsu included-all survive and are set free. The Confederacy agrees to fight for the Doman Liberation Front, and the Scions set off to find Hien.

After finding the King of Doma and winning the Nadaam, Alphinaud Leveilleur develops the strategy they will use to retake Doma Castle. For the Confederacy's part, once the twins and the Shinobi under the command of Yugiri destroy the barrier erected around the Dairyu Moon Gates, they, alongside the Kojin, would invade from the water and bombard the castle while also securing the Doman Enclave. Thanks to this advantage, the plan was able to succeed flawlessly, although the plan had to be altered to have the Kojin destroy the supports under the castle to throw it into the One River, with Yotsuyu still inside. Hien personally thanked Rasho and the members of the Confederacy, to which Rasho replied that he had been waiting twenty years to liberate Doma, and its freedom is more than enough thanks.

After the liberation of both Doma and Ala Mhigo, a Garlean force attacked the Confederacy, but was set to rout by both the confederate forces and the Scions. Though they were loath to do it, in return for helping them stop the Garleans that attacked them, they let the Scions ferry the now amnesiac Yotsuyu into Doma.