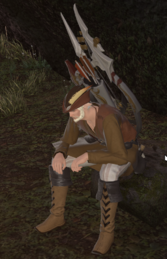 Once captain of the Gods' Quiver, this roving bard earned the name "Godsbow" for his almost preternatural skill in archery. It was several decades ago during an expedition to hunt down Ixal that Jehantel contradicted a direct order and ranged into enemy territory alone. While he was absent, however, his squad was attacked and slaughtered to the last. The gifted bowman spent the days following the ambush wracked by guilt, the regret eventually driving him away from the Gods' Quiver and into a life of aimless wandering. He returned to the Twelveswood many years later, claiming to have embraced the calling of a simple minstrel, and it is through his rebirth as a bard that the secrets of forgotten battlesongs have returned to the land.

Artemis Bow: A longbow beloved by Gilbert the Godsbow, he of much carnage. A mighty singer of songs as well as a slayer of Ixal, Gilbert dreamt of a bow whose form was sired by the noble harp, and set the finest smith in Gridania to the task of creating such a weapon. Keen ears claim that every arrow that flies true from the Artemis Bow sings a pure note as it charts its course.

Jehantel is an Elezen found in South Shroud.