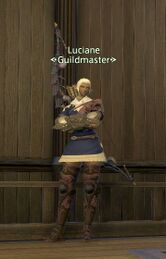 "Any half-wit can can bend the bow, but it is no simple undertaking to become a skilled archer."

Guildmaster Luciane greatly admired her father, a leader within the Gods' Quiver. By imitating him, the Wildwood Elezen grew into an archer whose skills left those around her in awe. While her father advised that she follow in his footsteps and become a Quiverman, Luciane had found her passion in attaining mastery of the bow. She thus chose to seek her fortune at the Archers' Guild, and there became a leader in her own right. At the compilation of this tome, the guildmaster had seen thirty and three namedays.

Luciane is an Elezen found in New Gridania.