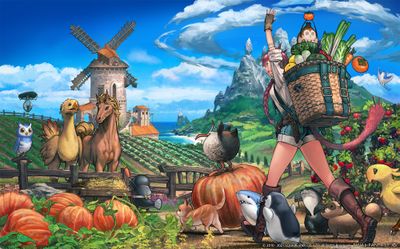 Find sanctuary in an island paradise abundant with wildlife, where crops may be sown and minions let to roam. What will you learn in nature's embrace─and what will you create from this newfound inspiration?
Make ready to set sail, for your hideaway awaits!

The island sanctuary allows you to create your own personal paradise amidst the natural beauty of the Cieldalaes. Here you can collect resources and materials, build accommodations, grow crops, and more. The goods produced on your island can also be exchanged for various rewards. Cultivate the land, or enjoy the slow life as your minions roam free─the choice is entirely up to you.

Traveling to the Island Sanctuary

While it is possible to craft and gather on the island sanctuary, it is not required to unlock Disciples of the Hand or Land to do so. 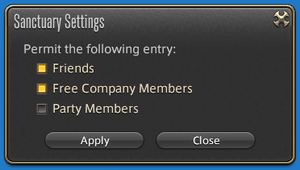 It is possible to visit the islands of acquaintances. Each island has room for up to 16 players (including owner) to explore at a time. 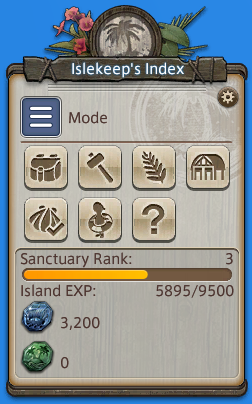 Selected mode influences how players interact with features and creatures on the island. 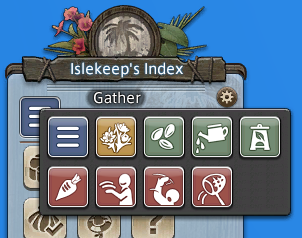 Allows player to water crop plots that are not fully soaked.

Allows player to pet their pasture animals. Has no effect on gameplay.

Interacting with an pasture animal from distance will make it come to player.

Allows player to capture animals. It is required to use appropriate restraint to match animals size. Each attempt costs 1 restraint, no matter whether capture was successful or not.

The main menu consists of buttons by which players can confirm important information and manage various aspects of the island.

island experience by engaging in various activities on the island. The higher rank, the more features and options will become available. Highest rank is rank 10. 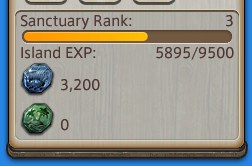 Current rank and amount of both Cowries

As development of the island sanctuary progresses, players will earn two types of currency -

Islander's Cowries. These are Cieldalaes-specific currencies to be used at shops that become available on the island.

Used to pay for expansions of the island through Pathological Pathfinders. Can be also traded with Horrendous Hoarder in Cozy Cabin for various items or with Produce Producer for seeds.

Used to buy items from Horrendous Hoarder in Cozy Cabin. Can be acquired by selling gathered resources to the Enterprising Exporter. 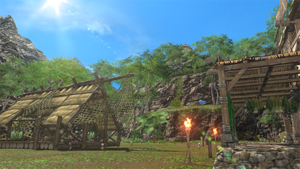 Center of the Hideaway

The hideaway is south-western part of the island and it's player's base of operations. All buildings, pasture and cropland are located here. 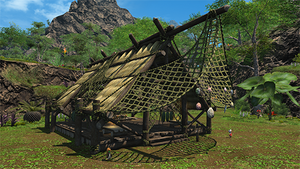 The Cozy Cabin is the primary facility of the hideaway. Player may access the orchestrion, exchange various items with merchants stationed there, and more. 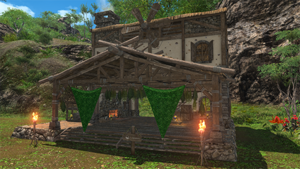 The Workshop provides a place for mammets in players employ to create handicrafts out of the materials obtained on the island. After conveying a schedule of production to the tactful taskmaster, handicrafts will be automatically created by the mammets on staff in the Workshop. Workshop can be built on any of the 5 facility plots, but only 3 Workshops can be built. There are currently three available upgrades: 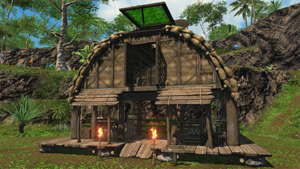 After constructing a Granary, players may send a team of exploratory mammets on foraging expeditions to gather materials. Each expedition will yield some common materials but most importantly, set amount of specific rare material. After choosing desired expedition area and the number of days, mammets will venture out to gather materials, returning once per day until the foraging expedition is over. If player has paid for multiple days of expedition, they can still change expedition area without any additional fee. Expedition returns every day at the same time. Granary can be built on any of the 5 facility plots, but only 2 Granaries can be built. There are currently three available upgrades:

Allows player to plant seeds and gather Produce. Each plants take 48 earth hours to grow. Plants need to be watered.

Note: Even though visually there are 10 plants per crop plot, each plot will yield only 5 Produce

Following image shows progression timeline of Island Sanctuary. Many features, building and upgrades require preceding upgrades and/or other features. Indirect requirements, like Islekeep's Stone Hatchet which you need to gather materials to build Cozy Cabin I, are not visualized. 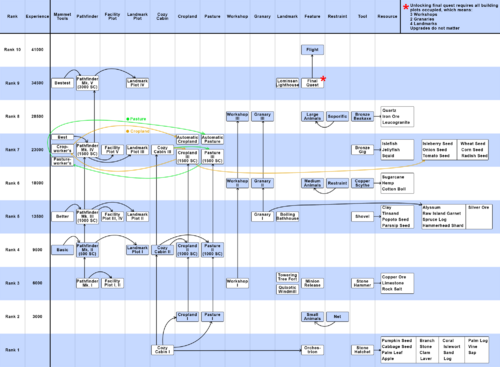 Common materials can be gathered from gathering nodes across island. They are not constrained by any mechanics like time or weather. They can be gathered endlessly. However, players need to have right gathering tools unlocked to gather specific resources.

Leavings are produced by pasture animals after certain amount of time. Each type of animal has 2 types of leavings - common and rare. This, however, is not related to quality or rarity of said leaving. One animal can drop Sanctuary Fleece as its common leaving and Sanctuary Milk as its rare leaving, but other animal can drop Sanctuary Milk as its common leaving and Sanctuary Fleece as its rare leaving.

Animals always produce its common leaving, but rare leaving has only a chance to drop depending on animals happiness. The happier animal is, the higher chance that it will drop its rare leaving. Happiness is influenced by the quality of its feed.

Produce are products that have been grown and gathered in Cropland. Every plant takes 48 earth hours to grow and highest upgrade of Cropland has capacity of 20 plots. Each plot yields 5 produce, meaning that maximum amount of produce players can generate is 100 every 48 hours. Produce can be used to create higher quality feed for pasture animals or to craft items in the Workshop.

Rare materials can be only obtained through Granary expeditions. They can be used for 3rd upgrades of Workshop III and Granary III or to craft items in Workshop. 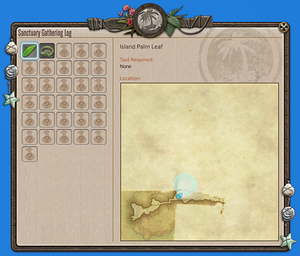 Players can collect resources and materials on their island, which are then recorded in the islekeep's index, where players can check where the resource is located. Materials are usually not limited exclusively to this area. With few exceptions, each gathering node contains 2 different resources, but players can only gather them if they have required tools. If player can gather only one resource from node, then they can gather only this resource. If player does not have tools to gather any of the two resources, they cannot see the gathering node at all.

Nodes have predetermined locations and use simple system where they respawn after player has gathered 10 other nodes. This means that players can keep gathering same 11 nodes in endless loop. However players cannot gather node if their inventory for gathered resource is full (limit is 999). 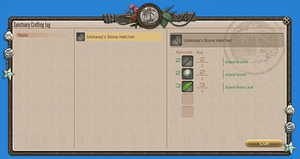 Acessing the Sanctuary Crafting Log, players can create items using the materials acquired from the island. Crafting log has 3 sections: 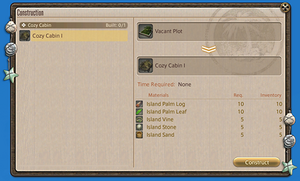 A variety of structures can be built on the island. Players must first access the logboard in front of a vacant plot, but they can check status and required materials remotely using "Manage Hideaway" from Islekeep's Index. 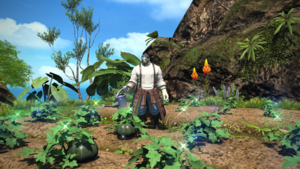 Players can plant seeds and get variety of produce. After upgrading croplands to level 3 at rank 7 and crafting Mammet-sized Cropworker's Tools at rank 8, players can pay Produce Producer for automation of the cropland. Players will not receive 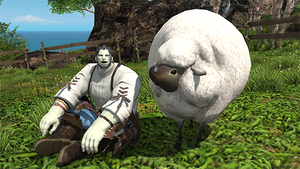 Players can capture animals, feed them and then collect their leavings. After upgrading pasture to level 3 at rank 7 and crafting Mammet-sized Pastureworker's Tools at rank 8, players can pay Creature Comforter for automation of the pasture. Players will not receive 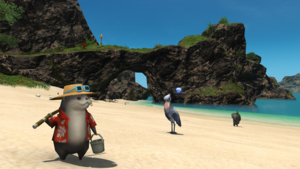 One of each minion, up to 40, can be released to roam free in the various areas of the island. As they while away the hours wandering about the island, players may find they behave differently when left to their own devices.

Find sanctuary in an island paradise abundant with wildlife, where crops may be sown and minions let to roam. What will you learn in nature's embrace─and what will you create from this newfound inspiration?

Make ready to set sail, for your hideaway awaits!