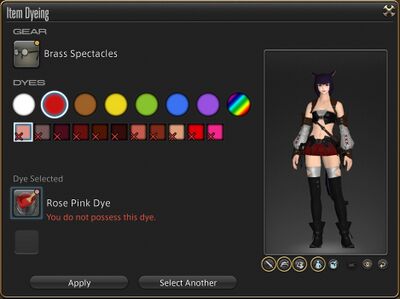 Dyeing is the application of dye to gear to change its color.

Before Players can dye their gear, they must complete the quest

Color Your World in Vesper Bay (X:12.6 Y:14.3) of Western Thanalan by speaking to the NPC Swyrgeim, or

A Self-improving Man from Wiscard in Mor Dhona (X:22.1 Y:6.7). Only one of the two quests can be completed and there is minimal difference between the two.

Color Your World requires the player to deliver

Orange Juice to Swyrgeim. Players can purchase a bottle of Orange Juice from the Merchant and Mender (X:12.1 Y:13.8) in Vesper Bay.

Players can dye their armor into different colors. One source of dyes is purchasing them from dye vendors in the following places (

A second batch of dyes are crafted by any level 30 crafter class.
A third group of dyes are only available from ARR Tribal Vendors.
A fourth set of dyes are exclusively bought from Enie in The Firmament (12,14) with

Skybuilder's Scrip from the Ishgardian Restoration.
Lastly, General-purpose or Green dyes are only acquired very rarely from Quick Exploration Retainer Ventures (via the

These last ones have an untradeable equivalent that can be bought on the Mog Station for real money and produce the same colors.

To dye a piece of armor, click on the Dye icon in the Actions & Traits menu or by right-clicking the desired icon and selecting the Dye option.