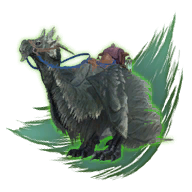 Of all the mounts seen in Norvrandt, naught is more ubiquitous than the amaro. Originally created by the mages of ancient Ronka, who selectively bred the flightless cama, present-day beasts carry the seed of their ancestors, which may manifest in the form of superior intellect.

That ever-so-endearing “gwee!” It's enough to melt a man's heart, I tell you. - Lamlyn

Amaro is a flight-capable airborne mount that can be summoned with an Amaro Horn. The Amaro Horn is a reward for completing the Achievement A Life of Adventure IV. Which requires the player to get every Disciple of War and Disciple of Magic to level 80.