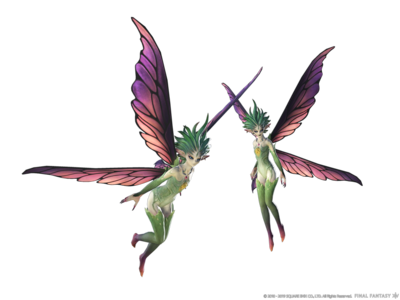 Pixies are Beastmen from Shadowbringers (5.0).

Though they boast a command of magic unrivaled in Norvrandt, pixies generally limit their sphere of activity to Il Mheg, dancing amongst the winds on colorful wings. Do not be fooled, however─they are often as cruel as they are carefree.

The Pixies make their home in Lydha Lran, a small settlement built by mortals who dwelled there long before The Flood. This location allows the Pixies to act as the sentinels to Il Mheg, using their extremely potent magick to confuse and bewilder potential invaders, pulling them into their twisted games. Should their unwitting victim not comply, they are turned into what the Pixies refer to as "leafmen", statues covered in leaves and vines that are cursed to live a trapped existence for all time. However, if those who enter into Il Mheg appease the Pixies and participate in their games will find the road to the rainbow fields open to them and may even be lucky enough to count the Pixie as their allies.

Despite their adorable countenance and childlike appearance, the Pixies are known for being incredibly devious and often cruel, putting their desire for "fun" over the desires, safety and wellbeing of others. Despite this, not all Pixies share this same desire for "fun" as the others. A group of Pixies known as the "Dreamspinners" act as the guardians of Lhye Mheg, the realm of dreams where children go when they fall asleep. These Pixies assure the dreams are pleasant and serve to strengthen the children.

The Pixies (and all of the Fae Folk) are ruled by an all-powerful fae known as Titania. The King of Fairies, while being in a position of authority, still retains the playful, albeit treacherous nature of the Pixies. Once they fought to protect Il Mheg against the Lightwardens, however the light of the Sin Eaters corrupted the fairy king, their nature grew even more sinister, and the other fae were forced to lock them away in Lhye Mheg.

Pixies are beings of Aether, born from the souls of departed children that have absorbed the ambient Aether of Titania, the king of the Pixies.