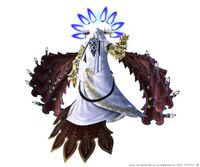 Nald'thal is a boss found in Aglaia. He claims to be "The" Nald'thal of The Twelve, revered patron god of Ul'dah.

While long considered a myth, an entity claiming to be Nald'thal appeared in present-day Eorzea some time after the death of Hydaelyn. Like the other entities he appeared alongside, Nald'thal denies being a primal, and does not appear to temper those in his presence. It is currently unconfirmed if he walks among mortals under a borrowed form as the entities who claim to be Rhalgr and Byregot currently do.

Nald'thal appears to be a single entity with two personalities, contained in a single body that possesses two heads. The head that currently is the dominant personality is on top of his torso, while the other is on the bottom of his torso, concealed by his robes. The torso (and attached heads) flip when Nald'thal's dominant personality changes.
Thal's head is porcelain white and always bears a serene expression. When Thal is dominant, he wears a hood and is covered in white robes, while a ring of fiery coins circles his head.
Nald's face is likewise serene, but his head sprouts six horns and is alight with flame. When Nald is dominant, his chest appears to be covered in a golden breastplate under his robes. When Nald'thal's realm is visited, it does indeed boast a city, but there is no sign of the Hell of fire nor of any souls.