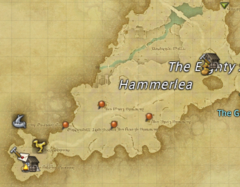 With the influx of refugees, the living conditions of Ul'dah no longer suit the tastes of its wealthiest inhabitants. Hammerlea, then, is their escape - an area upon which great estates will one day be built. A t present, mighty towers known as the Hammers pound the ground into a solid foundation, and give the place its name.

Hammerlea is a area in Western Thanalan.

From the East Aldenard Trading Company to the independent merchants of the Seventy-Seven Caravans shopkeeps, of all kinds send their wares through Scorpion Crossing. Here, goods unloaded at Vesper Bay are sorted by quality: the best sent to Ul'dah, and the remaining to the Silver Bazaar.

The Silver Bazaar was once the heart of Ul'dahn sea trade. However, few vessels put into port at the hamlet's lonely docks anymore, sailing instead for the deep harbor at Vesper Bay. Of late, the town is a refuge for those who saw their dreams shattered in Ul'dah and are trying in desperation to pick up the pieces.

In times long past, the merchants of the Silver Bazaar would light a great bonfire on a hill adjacent the hamlet in order to see ships safely into port. At the height of Bazaar's prosperity, money was donated by shopkeeps and ship captains alike towards the construction of a mighty lighthouse that stands atop that selfsame hill.