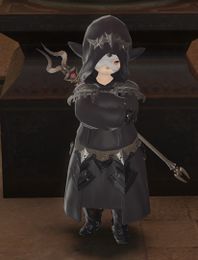 "Fire, lightning, blizzards, somnolence—the thaumaturge calls upon an expansive arsenal of offensive incantations to incapacitate and obliterate all manner of adversaries."

Cocobuki is a Lalafell found in Ul'dah - Steps of Nald.

At twenty-three, Cocobuki is the eldest of six siblings of Dunesfolk ancestry—Cocobygo, Cocobani, Cocobezi, Cocoboha, and Cocobusi. All are masters of the Thaumaturges' Guild, save for the youngest. In accordance with the sultana's will, they did much to calm the populace when riots broke out in the streets during the Calamity. For these acts, they were named guildmasters and successors to the former leader—a disgraced man named Mumuepo, convicted of embezzlement.[1]
Among his brothers, Cocobuki usually takes the leadership role and is often described as the wisest among them. He first instructs thaumaturges on the nature of aether and arcane manipulation. After their first test, he sends guild members to each of his younger siblings to learn the chapters of Thaumaturgy: The Yawning Abyss by the renowned thaumaturge Zozomaya.