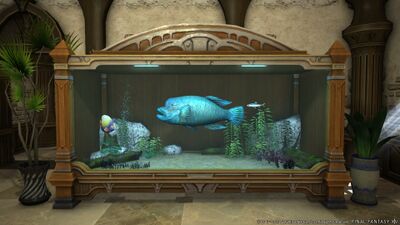 Aquariums, released in Patch 3.4, are a type of interior furnishing housing item that allows you to display fish caught from the various reaches of Eorzea in a free company house, personal house, private chamber, or apartment.

Your prized fish will go unnoticed no longer with an aquarium in the house! They're available in four sizes to accommodate aquatic creatures of all kinds. The tank can also be dressed up with one of several designs to show off your latest catch in style.

Before placing fish in an aquarium, players may choose to fill the tank with either freshwater or saltwater. This will dictate which types of fish can be placed in the aquarium. Please be advised that, in order to change the water type, any fish in the tank must be removed. Freshwater and saltwater fish cannot be placed in an aquarium together.

Starting with patch 4.3, multiple aquariums are now allowed per estate regardless of aquarium size:

Fish have been categorized into four sizes: small, medium, large, and extra large. Larger fish will occupy more space capacity in an aquarium, leaving less room for other fish. There is no difference between normal quality and high quality fish.

Aquariums are available in four sizes, the smallest holding only a single small fish, and the largest holding up to four. Because larger fish take up more room in the aquarium, one must choose carefully which fish they will put on display. Any fish removed from the aquarium will be lost / destroyed.

Accessories in the form of trimmings can be used to change the interior appearance of the water tank. Accessories will be destroyed when removed from the aquarium. Currently there are six trimmings available:

Players can purchase all tank trimmings except

Moonlit Tank Trimmings are obtained through the duty

The Minstrel's Ballad: Tsukuyomi's Pain. They can be also traded or purchased through the Market Board.

This key section of the article is incomplete. You can help the Final Fantasy XIV Wiki by expanding it.
Reason: List incomplete

You can find a list of all the possible fish that can be placed in the aquarium in the Aquarium Settings interface. Any fish removed from the aquarium will be lost/destroyed. There is no difference between normal quality and

Reminder: Freshwater and saltwater fish cannot be placed in an aquarium together.