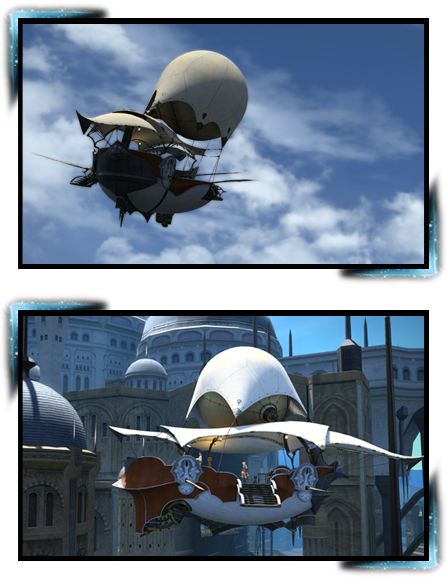 Airships are miracles of the Eorzean skyscape—flying vessels born from the ingenuity and ambition behind the Garlean Empire's most advanced technologies. The airships of the realm's free nations most commonly achieve flight by either one of two means—large balloons of hide and cloth filled with gases less dense than the surrounding air, or wings of magitek making, made to beat by powerful ceruleum-burning engines. Despite whatever technological simliarities they may share, however, the realm's vessels are easily distinguishable on sight from the enormous and sinister juggernauts of Garlemald—armored monstrosities designed for the sole purpose of destruction.

By pioneering the sky routes between the realm's major cities and establishing regular flights along them, Highwind Skyways, an institution founded by the exorbitantly wealthy aristocrat and adventurer Tatanora, is now slowly but surely making commercial flight an ordinary aspect of everyday life in Eorzea. Even so, only a few airships are permitted to take flight at any given time, for the Garlean Empire is always watching, ready to strike at the first sight of an enemy vessel.

Players can travel between the 3 major cities, Gridania, Limsa Lominsa and Ul'dah by using the airship. Airship costs less

Teleport but it is slower.

Highwind Skyways is the brainchild of Tatanora and Cid nan Garlond. Thanks to Garlond Ironworks and their study on the use of Ceruleum engines, Airship technology advanced at an accelerated rate, which Tatanora saw as an opportunity to expand trade routes and passenger services to the other city-states in a way that was impossible before. Following several attacks on passenger vessels by the Garlean Empire, airship travel was suspended indefinitely for civilians except for only the most extraordinary circumstances. However, following the Seventh Umbral Calamity, airships resumed regular travel.