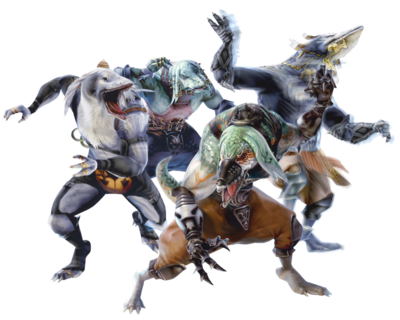 The Bangaa were once a common sight in the former kingdom of Dalmasca. Powerfully built and full of vigor, they are said to live almost twice as long as the average Hyur. Despite this vitality, however, their people birth offspring but rarely, to a comparatively low population.

Covered in rigid scales from head to toe, the thickly muscled frame of the Bangaa lends them prodigious strength and stamina. Their long-snouted appearance might cause some to mistake them for a variety of scalekin, but comparisons to lizards are considered a grave insult amongst their kind. When it comes to the hue of their scales, Bangaa can range from an iron grey to a coppery or yellow-brown color. This coloring is usually a means of identifying their clan of origin, but the mixed breeding of recent years has made this method of determination less than certain.

As omnivores that were long ago integrated into Dalmascan society, the Bangaa share much the same diet as the races around them. They are not overly fond of grains or cereals, however, and tend to consume larger quantities of meat.

The Bangaa were once governed by the religious leaders of the yellow-brown hued clans, but following a succession of wars, their nation was assimilated into the Hyuran kingdom of Dalmasca.

As citizens of Dalmasca, the Bangaa carved themselves an important niche in society. With their superior maculature and endurance they were in high demand as laborers and soldiers, and those who proved exceptionally loyal and skilled even became knights in the service of the royal family.

The grueling work of quarrying stone, transporting heavy loads, and further shaping the rock into usable blocks is a process which requires unyielding stamina and patience. As a people with both of these qualities in abundance, it comes as no surprise that the Bangaa were prominent in the field of masonry. Some even say that without their robust involvement, the resplendent stone structures of Rabanastre, royal capital of Dalmasca, might never have been built. Under the rule of the garlean Empire, the Bangaa are singled out for their bestial appearance and powerful physiques. Forced to perform brutal physical labor for hours on end, death through simple exhaustion is not uncommon.