The Isles of Umbra

The Isles of Umbra

A view of the Isles of Umbra.

The seas off the coast of Aleport are bespeckled by these islands, which include the mystical Moonshade Isle in their number.

The Isles of Umbra is a area in Western La Noscea. 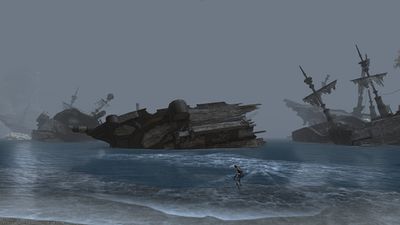 The main island can only be reached by taking a ferry from Aleport after being cleared for passage during the Main Scenario Quests, until flight is unlocked for ARR areas. The main island contains the abandoned lighthouse Pharos Sirius and is considered haunted by the locals.

Although the weather displayed next to the minimap will match the rest of Western La Noscea, the main Isle of Umbra has perpetual dark and cloudy weather.

The drop off point for the ferry going between Aleport and the main Isle of Umbra. Although it costs a small amount to go to the main island, passage back to Aleport is complimentary.

For centuries, ships wrecked off the shores of southern Vylbrand have been carried upon currents to this quiet inlet - a timeless reminder oft he deep's boundless wrath. So many are the wooden corpses which populate this watery lichyard, it is said that for every hull visible above the waves, a score more slumber beneath.

A small island west of the main Isle of Umbra. It is only accessible from Novv's Nursery while certain Sahagin Daily Quests are in the player's quest journal.

Pharos Sirius is a towering beacon built to guide ships safely jnto Aleport. Its fires were fuelled by aetherial energy - a techoology of Naldiq & Vymelli's as radiant as it was innovative. During the Calamity, however, some projectile struck the lighthouse, and turned the aether inside to a great mass of corrupted crystal.