In spite of the high rock content in the soil, men toiled patiently to reclaim Halfstone, and eventually established a farming settlement. Yet, all this was washed away when the primal Leviathan unleashed a great tidal wave after the Calamity, and the area is now little more than a barren stretch of rocky shore.

Halfstone is a area in Western La Noscea. 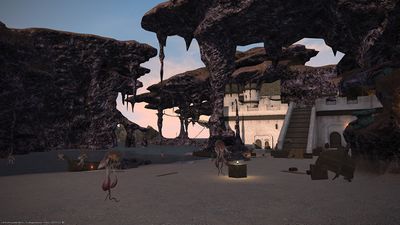 Halfstone is held by the sahagin, who are kept from raiding the settlements to the east by several defenses: North Tidegate, South Tidegate, and the outpost of Camp Skull Valley.

At this small beastman settlement, Clutchfather Novv raised his spawnlings alongside his unusually hospitable clutch.

Built by warriors from the seas, the Landbase has allowed the aquatic beastmen to assault the Maelstrom stationed at North and South Tidegate time and again.

This hidden harbor serves as a hideout for the rapacious Serpent Reavers, who have allied with the Sahagin against their fellow men.