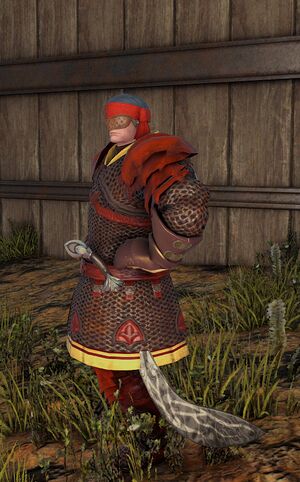 A Brass Blade standing guard outside the refugee camp of Little Ala Mhigo.

The Brass Blades are, in theory, the guardians of Thanalan. In practice, however, they are known for being corrupt and susceptible to being persuaded by coin and acting on the whims of the Syndicate, given that they are where their pay originates from.

As Ul'dah began to rise as a mercantile power, the Syndicate began to slowly step in and take more and more power from the Sultanate, they realized they were slowly gaining enemies who were waiting in the shadows to strike. Requiring protection, they began hiring sellswords to fill this role. They were tasked with maintaining peace around the city and answered to the 1st-3rd Main Brigades, although they were considered separate from the Bloodsworn or the Immortal Flames. This is to give the illusion that the Brass Blades work for anyone other than the Syndicate, however, they are all too aware of who pays their wages, and more often than not act in the favor of the Syndicate.

Regardless of where their allegiances lie, the Brass Blades train with and take part in exercises with the Immortal Flames, and patrol the city as well as the other towns and outposts of Thanalan.

As mentioned before, the Brass Blades patrol through the citys and outposts of Thanalan, and are generally charged with keeping the peace. They also help deal with the Beastmen threat coming from the Amalj'aa. They are known to be easily bribed and will often defer to whoever offers the highest price. Due to the shortage of other members of the military, they also guard the Royal Palace

Wearing heavy chainmail and using a large broadsword and a shield, the Brass Blades, though sellswords, are trained by the military and are adept fighters. While the majority of people refer to them as the "Monetarists' private army", there are those who are honorable and who want to do right by the people they are charged with protecting, like those guarding Little Ala Mhigo, for example.