Special Desc
Increases ATK of all allies within range by 20 (40 if the ally is a monster).
Special Dur
6s

Summon your Fenrir pup minion. This stray hoarhound pup is as feisty as the leader of his pack, and just as aloof.

Torn from his mother's teat immediately after birth and weaned on the manblood spilled daily in the Wolves' Den, this young hoarhound with soft blue fur was named after the spirit-beast of legend with hopes that he would grow to become as fierce and powerful.

Fenrir Pup is a monster minion. 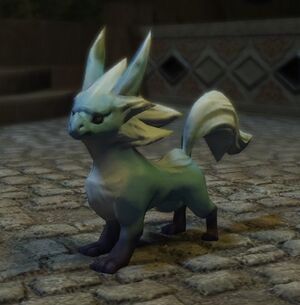