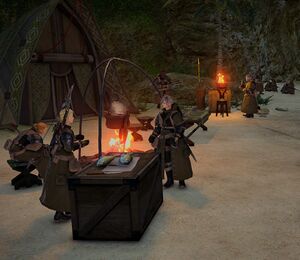 The Blades of Gunnhildr refers to both the guard of Queen Gunnhildr, as well as the elite group that acted as the head of the Bozjan Resistance. The former was made up of nobles and knights from the ruling class of ancient Bozja that was charged with safeguarding the queen, while the latter was the group spearheading the Resistance movement against the Garlean Empire in taking back their homeland.

During the Fourth Astral Era, the land of Bozja was engulfed in civil war between the various races that lived on the land. The war was eventually brought to an end when Bozja was united under a single banner by the woman who would later be given the name and title of Queen Gunnhildr. To protect the ruler of Bozja, the families of nobility came together and formed the Blades of Gunnhildr. These guards were charged with protecting the queen and her shrine maidens and were well known as a strong military force. The Blades of Gunnhildr were made up of a lineage of nobility and also acted as leaders in the community and conveyed the interests of the public to the queen. Their weapons were passed down through the generations, each blessed by the queen and covered in inscriptions and runes that gave them enhanced power. The weapons were extremely recognizable and signified each member's place in the Blades. Replicas of these weapons were created long after they were lost and were kept in the Bozja Citadel until it was destroyed in the Bozja Incident.

The Blades were instrumental in attempting to protect Bozja during the Fourth Umbral Calamity, as well as the downfall of the last Queen Gunnhildr. When the Allagan Empire collapsed and earthquakes began ravaging the land, the Blades and other members of the ruling class decided it was in their best interests to invoke the powers of the Save the Queen, the weapon wielded by the first queen, and call forth the Eikon dwelling within to deliver them from harm. However, the current Gunnhildr knew that if she took part in the ritual, her mind and essence would be erased, taken over by the entity within the blade, and refused. Desperate, the Blades hastily promoted one of her shrine maidens that showed great potential to take over the throne, and had her take part of the ritual instead. Instead of losing her life in the ritual, due to her powers as a "seer" (a power that would later go on to be understood as the Echo), she was not taken over by the spirit within the sword, and was able to wield the powers within at her discretion.

This terrified the general public, as well as the ruling class. The belief was that such an immense power could not be wielded without corrupting, and so the Blades set about plotting her assassination. In the end, the Queen was taken out swiftly, her death most likely a painless one. This would also be the last Queen Gunnhildr to be put on the throne, as Bozja would not survive the Calamity without the power of Save the Queen.

Following the liberation of both Doma and Ala Mhigo, the Bozjan Resistance gained a new resolve and bolstered their efforts to retake their homeland back from the Garleans. Seeking the help of Hien, the king of Doma, they were able to make connections with the Eastern kingdoms as well as the Eorzean Alliance, who furnished them with provisions and weapons, enabling them to begin their campaign on the Empire.

As a way to rally the Bozjan people, Misija Votyasch suggested that they reforge the original weapons of the Blades of Gunnhildr. Bringing Gerolt Blackthorn on as their blacksmith, and Mikoto Jinba and the Warrior of Light as their specialists with the Echo, they searched through the memories of Cid nan Garlond to learn the inscriptions on the replica weapons of the Blades held within the Bozja Citadel, and were able to successfully recreate the weapons of the blades. The unit that was given these weapons also took up the name of the Blades of Gunnhildr, as a show of their dedication to saving their homeland.

During the campaign on the Bozjan Southern Front, Misija revealed herself to be a double agent working for the Empire, and kidnapped Mikoto and the Crystal Focus, a device used to walk through memories. After mounting a rescue attempt to save Mikoto from Castrum Lacus Litore, the Blades had cornered Misija. Despite having the upper hand, they were unaware that she had retrieved the Save the Queen, a relic believed to be lost. Using the power of the Queen within the blade, as well as using the powers she artificially gained from the experiments on the Echo to become a Resonant, she was able to use the weapons powers to enthrall several of the Blades and bring them under her control. The Blades that were possessed were later twisted into extremely powerful monsters that guarded the ruins of Delubrum Reginae.

Through a massive battle, the Warrior of Light and the Blades of Gunnhildr were able to subdue Misija, and continue the battle against the Empire. In Zadnor, they pushed the Empire back further and further, reclaiming one outpost after another, until they reached their base of operations where the Empire was forced to make a last stand. Intending to use the Dalriada, a massive warship, against the Resistance, the ship was instead diabled and the Blades were able to come aboard and finally put an end to the Empire's reign over Bozja, and take part in destroying the Diablo Armament, an Allagan weapon of terrible power.

Thanks to the efforts of the Blades, the Resistance was finally able to break free from the Empire and become a free nation once again. Wanting to learn from the past, as well as the ideals of the IVth Legion, Bajsaljen Ulgasch immediately began penning the new legislation to create a new, prosperous nation that treats all its people equally. The Blades of Gunnhildr were put in a role as a temporary military force to help combat any retribution that may come from the Empire.