Althyk is the surveyor of change and space and the god of time. He commands the element of earth and is associated with the twelfth moon of the Eorzean calendar. Althyk is the father of Azeyma and Menphina, and elder brother to Nymeia. He is most often depicted as an austere emperor wielding a mythril greataxe. His symbol is the hourglass.

When Nophica planted a small sapling, Althyk used his control over time to bring the sapling to maturity, raising it to a mighty tree, creating the Heaven of Earth, to give rest and shelter to farmers, naturalists, historians and archeologists. The leaves from this tree fell into the Pit, rotting and smothering the thieves, defilers of nature, liars and revisionists who were condemned to the Hell of Earth.

By claiming enough victories in the Wolves' Den, adventurers can claim a suit of armor and weapons modeled after Althyk and his likeness. 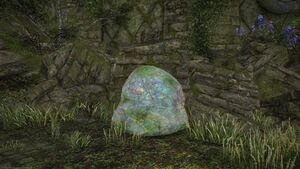 The Mark of Althyk can be found near Amdapor Keep in the South Shroud.