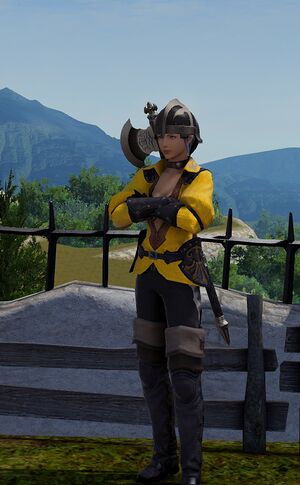 A member of the Yellowjackets surveying Summerford Farms

Justice cannot be purchased with coin, for that action is in itself unjust.

The Yellowjackets serve as peacekeepers around Limsa Lominsa and the surrounding settlements. Though they were initially part of the Knights of the Barracuda, following the Calamity, they went independent and were assigned a new position as part of the Maelstrom.

In the Sixth Astral Era, after the forming of Limsa Lominsa, Admiral Agatzahr used the taxation of the recently revived plundering trade to add to the ranks of his Knights of the Barracuda, one of these branches formed were the Yellowjackets. They were tasked with duties as part of the nation's navy, such as maintaining and enforcing The Code that the Admiral put into place to bring some form of honor amongst thieves and pirates.

Like other members of the Maelstrom, they are tasked with keeping peace within Limsa Lominsa, as well as patrolling and stopping acts of piracy. Outside of the city, they patrol and ward off the various monsters that may approach the smaller villages and settlements. They also handle pirates that come near Limsa, or would break part of The Code.

The Yellowjackets, as the name implies, wear bright yellow jackets and light helms, and wield a variety of weapons, but generally tend to favor the Two-Handed Ax, a popular weapon amongst the sea-faring folk.

The Yellowjackets are broken down into smaller "levys" that dictate where each member is dispatched as opposed to a rank.