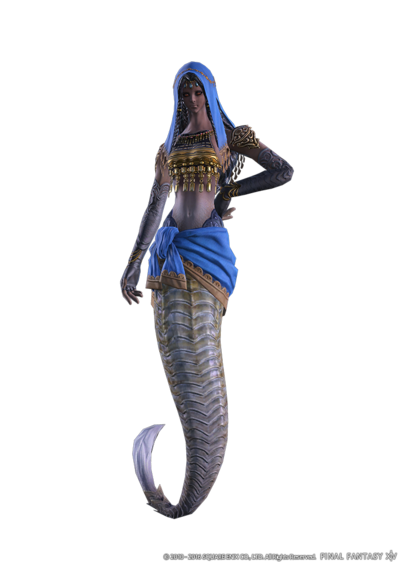 A serpent-like people who inhabit the mountains of Gyr Abania. Consisting solely of women, this tribe has existed since the time of the Allagans, and are famed for their proficiency with gemcraft, employing age-old magicks handed down through generations.

At a glance, the Ananta's upper body appears similar to that of a Hyur female, but closer inspection reveals that the "hair" upon her head is in fact a cowl of strands formed from rigid scales. Her most distinctive feature, of course, is a serpent-like lower body-a sinuous appendage which propels her along the ground with an undulating motion. An Ananta molts at regular intervals, constantly renewing the glossy sheen of her scaled skin.

The Ananta are hunter-gatherers, and subsist primarily on the flesh of the prey they bring down. This reliance on meat is in large part due to the stark landscape of Gyr Abania, and the scarcity of wild fruits and other vegetation. They are, however, fond of certain species of fungi, and have been known to use mushrooms for added flavor in their cooking.

The Ananta tribe has traditionally followed the rule of a broodmother who inherited her position through familial succession-a bloodline that can be traced back to the very first Ananta brought into being by the Lady of Bliss. Since the Empire conquered the region, however, the tribe has splintered over differences in ideology, and the Qalyana broodmother's unifying presence has begun to weaken.

The Ananta are proficient in metal-shaping spellcraft,and use their magicks to construct ovoid dwellings from the ore they draw forth from the ground. Djanan Qhat, the Qalyana broodmother's fortress, is a prime example of this unique form of architecture. Ensconced within their territory, the Qalyana isolate themselves from other civilizations in a bid to preserve their traditional way of life.

Conversely, the Vira faction of the Ananta elected to leave their ancestral stronghold and found the small settlement of Vira Nilya to the southwest. Unified under the guidance of Sarisha, the Vira have contributed soldiers to the Ala Mhigan Resistance, and actively sought interaction with outsiders. They are also known to have formed a beneficial relationship with the nearby M Tribe, and regularly barter goods with the Miqo'te. Regardless of faction, all Ananta decorate their bodies with spell-shaped metallic jewelry featuring embedded crystals. These crystalline pieces are worn to honor Lakshmi's demands for beauty, and are valued as a reflection of the wearer's soul.

Ananta lay eggs without the need for a mate, and whilst the bonds between mother and daughter are strong, they have but a tenuous concept of family. For these serpentine women there is only the "Ananta" and "everyone else"-they do not see the necessity for a family name to distinguish themselves from their own kin. The names of individuals come from their own language, and are often based upon Ananta terms of things of beauty.

Unlike the forgecraft of other races, where minerals are refined with fire, the Ananta employ spells to extract metal directly from the ore. The materials thus obtained are then shaped with the caress of magic rather than the blow of a hammer, resulting in pieces which shimmer with a preternatural gleam. Those especially practiced in the art can manufacture adornments of incredibly delicate and organic design with a swiftness that would be all but impossible using conventional crafting methods. Until recently, the market for these goods has been limited to neighbors such as the M tribe, but with the reopening of trade routes, entrepreneurs expect demand for the jewelry to sweep across Eorzea.

The Ananta are also known for weaving bolts of exquisite cloth, but have proven unwilling to divulge the secrets of their craft, Both the Weaver's and Alchemist's guilds of Ul'dah have examined the cloth in an attempt to divine the method of its creation, but have succeeded only in deducing that some manner of enchantment accompanied the spinning of the thread.