Nymeia is the watcher of celestial bodies and goddess of fate. She commands the element of water and is associated with the fourth moon of the Eorzean calendar. Nymeia is the younger sister of Althyk, and master of Rhalgr. She is most often depicted as a weaver donning a white, silken veil. Her symbol is the spinning wheel.

Nymeia melted the star that Thaliak added the essence of knowledge to that became the river that ran through the Heaven of Water, where the scholars, inventors, teachers and entrepreneurs live and thrive. Droplets fall from this riverbed down into the Pit, and stagnate. This is the Hell of Water, where the deceivers, counterfeiters, mountebanks and false prophets are sent to drown for eternity.

For a short period of time, Nymeia was the patron deity of Ala Mhigo under the rule of King Theodoric, until the city state fell. 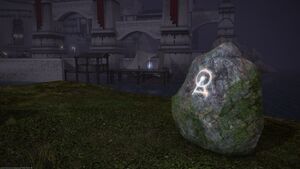 The Mark of Nymeia can be found near the Moraby Drydocks in Lower La Noscea.