Nophica, tender of soils and harvests and goddess of abundance, is the guardian deity of Gridania. She commands the element of earth and is associated with the eleventh moon of the Eorzean calendar. Nophica is the daughter of Azeyma and the younger sister of Llymlaen. She is most often depicted as a jubilant farmer holding a scythe of steel. Her symbol is the spring leaf.

The Heaven of Earth was born from a single seed that Nophica planted, and Althyk brought to maturity in moments by turning time forward. The mighty boughs of the tree offered shelter to humble farmers, naturalists, historians and archeologists. Leaves from this tree fell into the Pit, where they sat and rotted to create the Hell of Earth, burying the thieves, liars, revisionists and defilers of nature.

The area known as Nophica's Wells in Western Thanalan was once a bountiful oasis, but after the changes the Seventh Umbral Calamity brought to the environment, it eventually dried up and became as devoid of most life as the rest of the deserts of Thanalan. 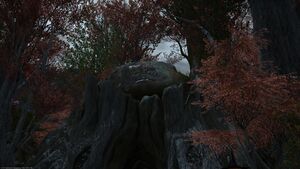 The Mark of Nophica can be found at the Stillglade Fane in Old Gridania.