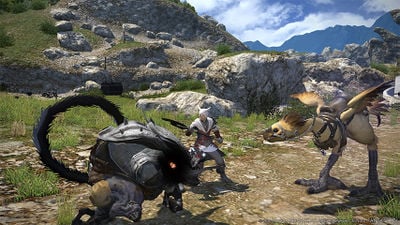 An adventurer and their Chocobo Companion in battle. 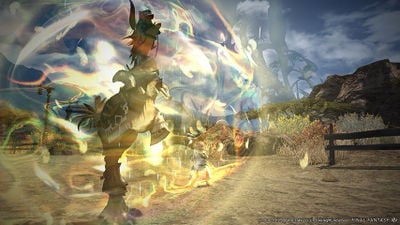 A Chocobo Companion buffing themselves. 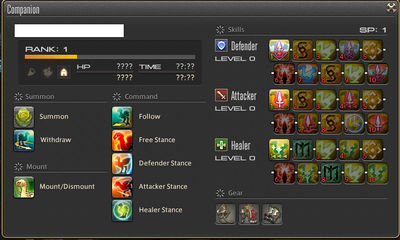 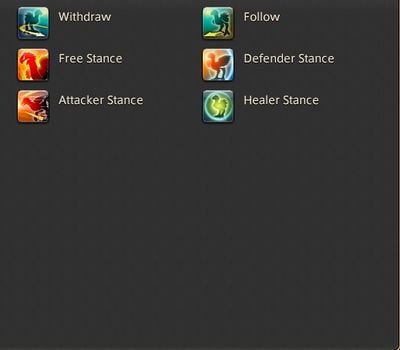 Companions are Chocobos that fight alongside players. Players are not only be able to rank up their Chocobo Companion, but also customize their looks and abilities. Players can specialize their Chocobos into tanks, healers or damage dealers by allocating their Skill Points into the Defender, Attacker or Healer skill trees. Players can customize their Chocobo with various bardings. Bardings are purely cosmetic; they give no bonus stats or other benefits. Chocobo Companions cannot be used in instanced duties such as dungeons, but can be summoned while queued using the Duty Finder.

Chocobo Companions are unlocked after the completion of the

My Feisty Little Chocobo quest, unlocked at level 30. The starting quest is acquired from an NPC named Docette, located in Camp Tranquil in South Shroud (X:17, Y:28). Players must have acquired their Chocobo Mount by completing the quest

Gysahl Greens are required to summon a Chocobo Companion. They can be purchased for

36 Gil each from many vendors throughout the world. When summoned, the Chocobo is displayed as a party member and remains summoned for a 30 minutes, after which it is automatically dismissed. While summoned, the player feed the Chocobo more Gysahl Greens to keep them summoned. Each Gysahl Green will add 30 minutes to the timer up to a maximum of 1 hour. This timer is temporarily suspended while the player is in a city, an instance, or while mounted. After death or dismissal, players will need to expend another Gyshahl Green to resummon their Chocobo Companion.

companion experience points through defeating monsters, which in turn will allow it to rank up. The Challenge Log can also be used to increase the Chocobo's Rank; Bosom Buddies I grants 5% of the current Rank's

experience through any other means, including FATE experience, Levequests, or Quests. Ranking up grants the Chocobo Companion Skill Points (SP) each level.

experience once they reach Rank 10, at which point they must be fed a

Thavnairian Onion, which will allow them to increase their Rank once more. This must be repeated for each rank until Rank 20, after which a Chocobo Companion can no longer earn any additional

experience, Ranks, or SP. Experience required for each Rank rises dramatically, and therefore it will likely take quite some time before a Chocobo Companion reaches the max Rank.

Reagan Pepper, purchased from the player's Grand Company Quartermasters for

48,000 Company Seals, or from their Hunt Billmaster for

Due to the nature of the player's lack of control over the companion's attacks and positioning, it is recommended to avoid leveling the Defender tree first. The player will almost always out-aggro the chocobo, so Tank and DPS classes should focus on the Healer tree, while Healers would benefit most from the extra DPS of the Attacker tree.

A Chocobo's appearance can be customized using various Bardings. Bardings are equipped in three different slots and are purely cosmetic: Head, Body, and Legs. Different Bardings can be mixed and matched to create a unique look for the Chocobo. Additionally, any Bardings will also appear on the Chocobo when ridden as a mount. This applies only to the "Company Chocobo" mount, and not any other Chocobo variations. Players can also change the color of their Chocobo; please see Chocobo Colors for more information.

Each individual skill costs its level in SP (level 1 costs 1, level 2 costs 2, etc). SP Cost in the table below is the total needed for that level.

Auto-attacks while using all unlocked skills as the chocobo sees fit. A Chocobo Companion will auto-attack the first enemy the player engages, alternating between using unlocked Weaponskills and Healer Spells. The Chocobo Companion's target can be changed by switching it to Follow, then back to Free Stance.

Auto-attacks and exclusively uses unlocked Weaponskills and Abilities from the Defender tree.

A Defender Chocobo Companion will struggle to hold enmity for most players. Moreover, even in situations where they are able to do so, they will quickly die without any healing, as they are unable to use any Spells from the Healer tree while in Defender Stance, even if they are unlocked. If the player would like their Chocobo Companion to tank, they will need to be prepared to hold back their DPS as well as keep them healed. Due to this, the Defender Stance is the least useful of the stances.

Does not auto-attack and exclusively uses unlocked Spells from the Healer tree.

A useful stance if the Chocobo Companion has no Attacker skills unlocked. They will use Choco Regen whenever a member of the party or themselves take damage, while Choco Cure will be used when dropping below 75% HP. Choco Surge will be used whenever it is off cooldown. The Chocobo Companion will also follow behind the player directly while in this Stance, so make sure they are lead out of the range of any ground-targeted abilities, or they will be hit by them.

Auto-attacks and exclusively uses unlocked Weaponskills from the Attacker tree.

While this stance is simple and straightforward, it should be noted that a max Rank Chocobo Companion with all unlocked Skills will get slightly more out of using Free Stance, even if the goal is raw DPS. This is due to the cooldown of Weaponskills in the Attacker tree not being shared with those of the Defender tree. The increased enmity of Defender skills is inconsequential in any context, unless the player or their party's DPS is exceedingly low. They will also be able to sustain themselves and the party while in Free Stance, which they are unable to do while in Attacker Stance.

When feeding the below foods to a summoned Chocobo Companion, they will gain a boost to their stats for as long as they remain summoned. If the food is a Chocobo's favorite, it will gain an additional boost.