Oschon is ruler of the mountains and god of wanderers and vagrants. He commands the element of wind and is associated with the sixth moon of the Eorzean calendar. Oschon is the brother of Nald'thal, the divine lover of Menphina, and the close companion of Halone. He is most often depicted as a carefree rander wielding a bow of yew. His symbol is the walking stick.

In the Heaven of Winds, Oschon is the ruler of the mountain range that rests on the endless ocean of Llymlaen, which acts as the resting place for explorers, climbers, saints and adventurers. The gales that blow off his mountain enter the Pit, creating vicious winds that rip the flesh off the defilers of land and sea, bandits and pirates who are sent there.

By claiming enough victories in the Wolves' Den, adventurers can obtain gear and weaponry made in the image of Oschon.

A lighthouse constructed on The Gods' Grip in Lower La Noscea is named Oschon's Torch. This sits on the shore opposite another lighthouse named "Llymlaen's Ring". 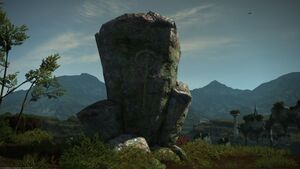