Special Desc
Increases DEF of all allies within range by 20.
Special Dur
10s

Summon your bombfish minion. He will give you an offer that can't be defused.

Given its name after a fisher claimed to witness the wavekin explode after tossing it on a grill, the bombfish is, in fact, neither related to bombs of voidsent origin or even that combustible.

Won't get nowhere up its crack, yunz won't, not with that piddly bomb. - 13th Order Alchemist Ga Zi

Bombfish is a monster minion. 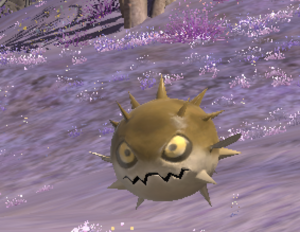