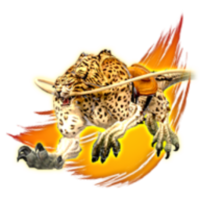 Native to the jungles of the Near East, coeurls were only recently introduced to Eorzea, brought over from faraway lands such as Thavnair by Ul'dahn nobles who thought to breed them as pets. Now, but a handful of skilled tamers living in recluse on the Pearl are said to be able to train them.

Coeurl is a flight-capable terrestrial mount that can be summoned with a Coeurl Bell. The Coeurl Bell is an in-game bonus item included with the Collector's Edition of A Realm Reborn.