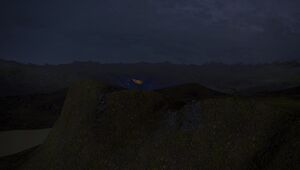 The melted, twisted remains of Bozja Citadel in the center of a massive crater

The Bozja Incident is a disaster that took place in the early testing phase of the project known as Project Meteor. It resulted in the destruction of an entire city and the surrounding area, and a massive loss of life.

During the first Eorzea campaign, the Garlean Empire sought to find a way to stop the Primal threat that was hampering their advance through the land. Through examining records from various Allagan records and artifacts, they learned that the Allagan Empire had also battled with summoned forces, and had overcome them, however the exact method was unknown. Eventually they discovered records regarding Dalamud, and learned that it was in fact an ancient satellite they had launched to gather energy from the sun. Midas nan Garlond surmised that the power of Dalamud could be harnessed and used as a weapon against the Eorzeans. This brought about the name of the project, as Emperor Solus Galvus claimed the moon "would act as the Empire's meteor."

The project was brought before the Garlean Imperial Court, and was met with widespread approval, and was drafted and received the blessing of the Emperor.

With the project underway, Midas went about reading records and reports from the Allagan Empire about how they communicated with the satellite. Nael van Darnus and the Darnus family donated several relics and artifacts that led the team heading the project to finally building what they called a lunar transmitter. With the method to communicate with Dalamud now established, the Empire selected a location they believed was high enough to send a signal to the moon; the captured city of Bozja, which housed the Bozja Citadel, a towering structure.

Once they had brought the device to the top of the tower, Midas activated it and indeed managed to communicate with the moon, and attempted to gauge the energy stored within. The satellite responded in kind by firing roughly five millenia worth of stored energy back at the tower. The beam incinerated the tower, the city and the surrounding area in the blink of an eye.

Despite the best efforts of the Garlean Empire to censor what happened, a major commercial hub disappearing and being replaced with a smouldering crater was a hard thing to hide. This came to be known as the Bozja Incident.

With the transmitter, Midas, the team and all of the relics housed in the Bozja Citadel completely destroyed, the Emperor declared the project a failure. He deemed the power of Dalamud too unpredictable and not worth pursuing further.

This was not enough of a deterrent for Nael van Darnus, however, who kept the project alive in secret. Ten years later, Darnus managed to convince the Emperor to revisit the project, claiming it would end the decade-long stalemate with the Eorzeans. Agreeing to repen the project and "solidify his legacy", the White Raven saw to the completion of the project, culminating eventually in the destruction at Carteneau and the releasing of the elder wyrm Bahamut.