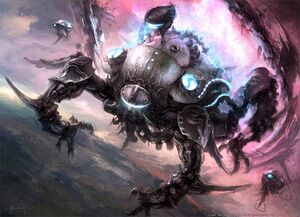 The Omicrons are a tribe from the Endwalker (6.0) expansion.

The Omicrons are a race of machines first encountered during the Omega raids in Stormblood. They warred with Midgardsormr and the dragons on the Dragonstar in the distant past. Omega, and all Omicrons, seek continuous self-improvement through battle. In the end, the Dragonstar itself was destroyed, and Midgardsormr was forced to flee to Hydaelyn with the clutch of eggs that would become The First Brood.

Omega was later defeated by the Warrior of Light, and the next time this species would be encountered is at Base Omicron in Ultima Thule. The Omicrons are revealed to have originally been organic beings with weak physical forms that sought cybernetic augmentation as a means to offset external threats. One can only presume that some of the planetary remnants at Ultima Thule belong to the Omicron home planet, Alphatron.